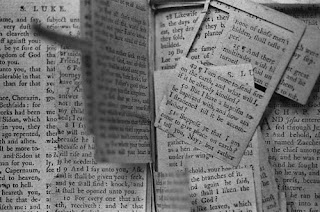 Thomas Jefferson disagreed with parts of the New Testament and considered them irrelevant (or too “supernatural”) to the core parts of the Christian faith.  He famously published his own New Testament with sections edited out, entire books missing.  It’s been called the Jefferson Bible.

History repeats itself with the advent of the Conservative Bible Project, an online effort to re-translate (or perhaps rewrite) the bible to better reflect their concept of conservative ideals.  From the link (yes, this is serious):

As of 2009, there is no fully conservative translation of the Bible which satisfies the following ten guidelines:

Thus, a project has begun among members of Conservapedia to translate the Bible in accordance with these principles.

Read the rest of the entry, including the “examples” and try to not either cry/weep/laugh/or HULK SMASH. It is just insane.  I cannot pretend to have a neutral position on this.  As Rod Dreher says:

It’s like what you’d get if you crossed the Jesus Seminar with the College Republican chapter at a rural institution of Bible learnin’…These jokers don’t worship God. They worship ideology.

Truth.  Even the Jesus Seminar or Red-Letter Christians don’t cut out parts of the bible…they merely elevate verses over others.  Everybody does that, even the hardest of literalists.  So this is a farce.  There, I said it.  It would be funny if it weren’t obviously an honest effort.

This is a bad.hack, one that negates the dissonance that every follower of Christ ought to experience and replacing it with a biblical echo-chamber that only sends back conservative rainbows in reply.  It either will hurt Christianity by playing to people’s (especially, typically, conservatives’) need for certainty, or will expose the bible as neutered without the dissonance of thought and expression.

But don’t take my words for it…the author of a 2004 translation/compendium of the original Jefferson bible had this to say:

[Jefferson] decided that the rules of the club to which he wished to belong were not the rules he wanted to play by. So instead of changing clubs, he changed the rule book by literally cutting and pasting together only the sections that he found relevant to his interpretation.

In short, this has no more place in public discourse than the LOLcats Bible…except that one is HILarious.  This Project is just scary dumb, written by people without any of the values of either Conservatives or Liberals, and hopefully in the annals of time it too will end up on the cutting-room floor.