A blog I just found has a chart comparing some religions.  There may be a flaw in it, but it can be useful when comparing Christianity to other religions.

Here’s one of the charts:  Pay attention to the side categories (see how in Christianity that God is Uncreated and Unseen, with angels as created and unseen, while humans are created and seen).   Got it?  OK, compare it to the right side’s Buddhism and Hinduism.

Essentially, what the author is saying is that comparing the Judeo-Christian God to the gods in Buddhism and Hinduism is a bad comparison.   From the blog post:

Hopefully this makes it clearer why it is NOT legitimate to compare Pagan, Buddhist and Hindu gods to the creator God we Christians worship, how such comparisons involve a category confusion and how, amongst other things, such gods and goddesses are more meaningfully compared to angels. In you want to understand how the Christian God compares to other non-Abrahamic paths, it is more meaningful to explore concepts like karma and mu.

Simplistic, but helpful.  And as the author explains further on his blog post, he doesn’t mean to ascribe value by making them upper-middle-lower.

Thoughts on these charts?  Are they helpful for interfaith dialogue and comparison, or are they trying to ascribe a common paradigm to religions that are structurally just…different!

On a goofy endnote, if you apply the categories above to Star Wars, here’s what you get: 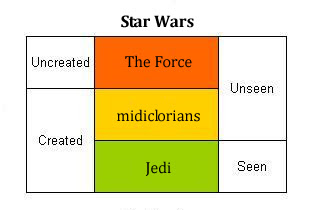 For those of you sadly unaware of midiclorians,
they came about in the prequels. Sad, I know.

As you can see, like most things in Star Wars, it correlates more to Eastern religions than Judeo-Christian ones.