You are here: Home / UMC / The WJ Case for Bishop Oliveto – Jurisdictional Autonomy 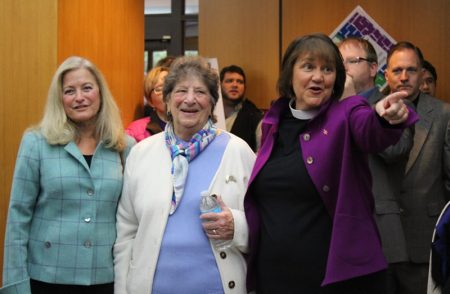 Good morning, Mr. President and Members of the Judicial Council. My name is Richard Marsh. Together with Llewelyn Pritchard at my side, we represent the Western Jurisdiction College of Bishops as an Interested Party in this matter. The members of the WJ College present at this hearing are: Bishop Robert Hoshibata, Bishop Elaine Stanovsky, Bishop Minerva Carcaňo and Bishop Karen Oliveto. Bishop Grant Hagiya was unable to attend. Thank you for the opportunity to be heard on this matter.

I will divide my remarks under four general points.

The basic facts in this matter are undisputed and relate to what happened in 1939 when the Constitution of the Methodist Church was created and to what happened at the WJ Conference in July 2016. No other facts are relevant to the correct decision by this Council. The 1939 facts relate to the constitutional structure of the church. The 2016 facts are that Bishop Oliveto was an elder in good standing at the times of her nomination, election, consecration and assignment as bishop.

The jurisdictional structure and episcopal plan created under the 1939 Plan of Union is in our Constitution today.

“As the only provision in the Constitution relating to election of Bishops is that they shall be elected by the respective jurisdictional and Central Conferences, it would be unconstitutional for the General Conference to elect Missionary Bishops.”

Next, we have three constitutive bodies in our Church: the General Conference, the Council of Bishops and the Judicial Council. The concept of separation of powers in central to this tripartite structure of our Church government. It is much like the structure of the federal government in the United States.

There is no precedent since 1939 for challenging an episcopal election. Nor should the Judicial Council take this opportunity to create such precedent.

The only way to challenge the action of a constitutive body like a Jurisdictional or Central Conference is by whatever mechanism the constitution provides for such a challenge. Just like the US Congress cannot pass legislation outlining a procedure for impeaching a US President (because the US Constitution provides the only mechanism for impeachment), neither can our General Conference enact legislation providing a mechanism to nullify an episcopal election. The mechanism for a such a challenge must appear in the Church’s Constitution. There is no such mechanism in the Church’s Constitution. Nor does the SC Jurisdiction attempt to argue that the WJ election was unconstitutional.

By its Request for Declaratory Decision, the SC Jurisdiction seeks to violate the very structure that has unified the Church since 1939. In this sense, the SC Jurisdiction seeks to lead the way in breaking the order and polity of the United Methodist Church. The Request for Declaratory Decision in fact negates, ignores and violates the laws of our Church as set forth in the Discipline.

The Judicial Council cannot assume jurisdiction over the SC Jurisdiction’s Request For Declaratory Decision without unconstitutionally interfering with, and thereby destroying, the plan of itinerant general superintendency guaranteed under ¶19 of the Restrictive Rules. Jurisdictional and Central Conferences have the constitutional right to decide who will exercise residential and presidential supervision in their respective jurisdictions.

Here, in 2016, by a vote of 88-0, the WJ Conference elected a bishop in whom they vested the powers of residential and presidential supervision. Does anyone here really believe the Holy Spirit was not present at that election? The SC Jurisdiction has no standing to challenge that election without interfering with the Constitution’s plan of general superintendency and violating ¶19 of the Restrictive Rules.

Earlier this year, the Southeastern Jurisdiction College of Bishops issued a “Q&A” memo in which the College said that the WJ episcopal election “does not directly impact” the work of the SE Jurisdiction.

For the reasons stated, the Judicial Council should decline jurisdiction.

This opening framework pairs nicely with what Hacking Christianity wrote before the trial: jurisdictions have autonomy thanks to the South, and now the South cannot take that back without a constitutional crisis, and the Judicial Council would be wise to not upend the cart.