You are here: Home / UMC / Schism / How “Historic Christian Teaching” became a lever for Schism in the #UMC

All is not what it seems when the phrase “historic Christian teaching” is used in United Methodist circles. 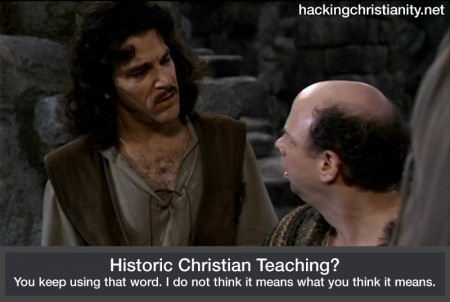 Faithfulness to the Standards

Earlier this year, we looked at the buzzword “historic Christian teaching” and how the phrase was re-defined beyond its roots (theological affirmations about the Trinity) to be used to exclude LGBT persons from various churches. Read it here. Now we turn our attention to the United Methodist Church and the special meaning a similar buzzword has within our church culture.

“Historic Christian Teaching” in the UMC is referred to as “The Standards“: the primary extra-biblical documents of the people called Methodists. The Standards include the Articles of Religion, Confession of Faith, John Wesley’s sermons, Wesley’s notes, and Wesley’s journals. They do not include the Creeds: Wesley removed the Creeds from the Articles of Religion that he edited to begin the Methodist movement in the American colonies…even though Wesley likely assumed their influence.

Being faithful to the Standards means two things:

But what happens when people say The Standards aren’t being upheld? Like “historic Christian teaching” becoming used as a weapon, I believe there are two ways how it is being used as a lever for schism in the United Methodist Church.

A Rally Cry for Schism

First, “The Standards” are being used as a rally cry to split the United Methodist Church, even though no violation is on the horizon.

Rev. Tom Lambrecht of The Good News Movement, a conservative renewal group in the United Methodist Church, has claimed that there are two scenarios when their organization would advocate for separation:

Good News has added two rationales for separation to the two adduced by Wesley and mentioned by Oden. First, the official acceptance (by vote of a General, Jurisdictional, or Annual Conference or Judicial Council decision) of false doctrine by the church (contrary to our established doctrinal standards). Second, the persistent and systemic failure of the church to uphold or enforce the doctrinal or ethical standards of The Book of Discipline. This failure would also include the widespread persecution and/or oppression of those who hold to an historic confession of the Christian faith within The United Methodist Church.

It obviously makes sense that if the Church said the Trinity was dumb, that would call for separation. However, the phrase is most often used in the LGBT debate: “if the church affirms LGBT ordination or marriage equality, they are in violation of The Standards.”

There’s something else going on here.

Second, “The Standards” may one day be used to allow churches to seize millions of dollars and property from ownership by the United Methodist Church.

The Rev. Dr. Tom Oden (see previous article) is a key intellectual force in the conservative renewal groups. Oden has served on the board of the Confessing Movement, the IRD, and was a contributing editor to the Good News Magazine for 15 years. He dedicated 45 pages of his 2006 book Turning Around the Mainline to this argument: if it could be argued in secular court that the UMC had violated The Standards, then local churches could break the trust clause (which says the global UMC has ownership over the local church property, which they maintain “in trust”):

It is erroneously assumed by some that denominational officials, whether faithful or unfaithful to the doctrinal standards, have a right to direct the use of Methodist church property. The evidence proves the opposite. It is only on the basis of faithfulness to the Standards that one has a right to the use of the property. One who abandons faithfulness to the Standards has no right to the property…

Since local judges are not theologians, it is possible they could be successful in this strategy, or have it be successful in a state-by-state patchwork fashion, much like the Episcopal Church’s struggles with the ACNA schismatic churches.

…and a lot of money.

Based on the CUP plan and on the Confessing Movement’s 12/17/2015 “Happenings” email, there’s a number of Methodists who are opposed to LGBT inclusion and want to break the United Methodist Church. Why do this?

For one reason, breaking from the UMC has serious financial benefits:

The renewal groups stand to be the biggest beneficiaries of schismatic Methodists’ freed-up apportionment dollars. As well, two of the more conservative seminaries (Asbury Theological Seminary and United Theological Seminary) stand to be key beneficiaries of churches that turn their church tithe into designated donations. Little wonder the paid staff from renewal groups and conservative institutions use these buzzwords with reckless abandon.

In the end…it’s all about the Gay

Let’s be clear: the issues being discussed in “Historic Christian Teaching” and “The Standards” aren’t about the Trinity, the nature of God, the divinity of Jesus, or the validity of Wesleyan Grace–topics that are actually in historic Christian teaching and United Methodist Standards. The only contexts where these buzzwords come up are to exclude LGBT persons in the life of the Church. That’s it.

By redefining these terms, conservative evangelical caucus groups and seminaries create a rally cry to leave the United Methodist Church, and a legal line of argument (however questionable) for schismatic churches to seize church property in a dispute. Such funds and property would be the basis of a new network of anti-gay churches, of which both groups would be leaders in. Hmmm…

To our peril, there will be many efforts to relax or do away with the Trust Clause at General Conference 2016. Our current polity keeps cooler heads to prevail amidst hot topics, and it’s important that efforts to relax the trust clause be opposed.

I pray that a sense that we are better together will prevail once more. I hope you pray with me too.