You are here: Home / UMC / Schism / Doing Away with the Western #UMC? 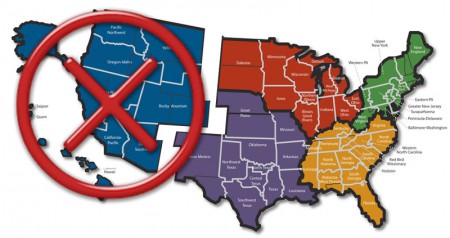 Recently, two proposals have called for a disbanding of the Western Jurisdiction, the most progressive region of the United Methodist Church.

First, the Texas Annual (regional) Conference recently sent legislation to General Conference 2016 calling for the disbandment of the Western Jurisdiction and a re-allocation of their eight annual conferences to two other jurisdictions. From the Pre-Conference journal, page 50:

Current jurisdictions vary widely in membership, with some unable to support themselves financially. Consolidating will save resources and create balance across the church in the U.S.

This proposal passed. It’s interesting that the proposal is fixated on the West costing the UMC too much money as this has been solidly debunked here: in short, the South needs to fix their own giving first.

Second, Rev. Dr. Christopher Ritter, a clergy in the  Illinois Great Rivers conference, recently penned a proposal to “flatten” the UMC. Check out the fifth point:

#5:  If a jurisdiction falls below five constituent episcopal areas, it must disband and its annual conferences must each join another jurisdiction. If the culture of a jurisdiction is not helpful to the ministry aims of the annual conferences, there is no reason for it to continue to exist.  Surplus bishops in jurisdictions should retain their title but be assigned by the college of bishops to a local church of that jurisdiction.  Each jurisdiction should fund their own bishops and all bishops, as superintendents of the general church, should meet the Book of Discipline requirements for the office.

Currently, four of the five jurisdictions have nine or more Bishops. Only the West has five bishops. So the Western Jurisdiction would be the first to be disbanded, according to Ritter’s proposal. In fact, it demotes their bishops to become local pastors in function. Wrapped in seemingly reasonable language, Ritter calls for a disbandment of the Western Jurisdiction and a removal of their bishops from their elected tasks.

Make no mistake, both of Ritter’s “Unity” Jurisdictional Plans, just as jurisdictions marginalized African-Americans in the 20th century, are about gerrymandering progressive voices out of influence in the 21st.

In summary, the current political climate is that the Western Jurisdiction is the worst of United Methodism and needs to be destroyed. By gerrymandering the UMC so that the progressive majority in the West becomes the minority in the other jurisdictions, then they are marginalized and silenced.

Well, there’s a lot of bad news out there for the church. Perhaps the UMC has found a scapegoat in the Western Jurisdiction and believe that their ills will be over when the scapegoat is destroyed. According to Girardian theory, when a groups’ dominant power structure is challenged…

To me, this is a textbook example of Girardian scapegoat theory: a majority culture taking out their organizational angst on a minority group in United Methodism? For arch-conservatives who see their inherited dominance slip through their fingers, it’s quite easy to point those fingers at others.

…or fleecing the sheep?

But maybe I’m being overly negative. I’m sorry about that.

Maybe it’s really just as simple as that the West has substantial achievements compared to the rest, and instead of celebrating that, anti-westerners want to claim these successes as their own.

There’s a difference between quantitative and qualitative church growth. I know the North and South are bigger quantitatively, but the numbers above show the West might be stronger qualitatively. It could be a contention that the West has much to teach the Rest of Methodism about discipleship in the None Zone before this creeping secularism gets to their doorstep.

Maybe it’s not about gerrymandering away progressives or scapegoating them for our ills, but simply that the West is picking up on something–the future, maybe, of discipleship–and rather than let the West continue their success, anti-Westerners want to control it and claim it as their own.

A rising tide lifts all boats

Competitive, zero-sum actions like these are polar opposite to the prevailing missional spirit in United Methodism. As I’ve said before: Every challenge we overcome in the West is one less that the Bible Belt will have to deal with when the collapse of Christendom comes to their doorstep.

A rising tide lifts all boats. The successes that the West has are all of United Methodism’s already. But the truth is that we likely wouldn’t have achieved such things if we were controlled by distant majority cultures more than we already are. We are living out progressive Methodism in its formative rough stages, sowing the seeds for an explosion in the future.

These vindictive efforts within United Methodism need to figure out their problems without pointing to a scapegoat, and celebrate our successes across the connection. We may not see eye-to-eye on some topics, but we are in one mission overall. Indeed, it’s counter-productive to silence the successes of the rough edges of an organization. Author Brian McLaren says the best institutions relate to movements within it in this way:

Whether you like it or not, the West is one of many movements in the UMC. Let’s keep it alive a bit longer, let it play out, and see what the future with hope holds.