You are here: Home / Church Talk / church growth / Can Churches jump on the post-car age before Culture?

As the United States and Europe plan for fewer cars in their cities and increased renewable energy infrastructure, how can the church adapt? 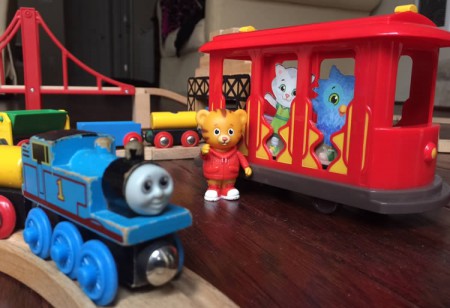 No Cars in the Land of Make-Believe…

My daughter, like most toddlers, is obsessed with Daniel Tiger’s Neighborhood, an animated spin-off of Mr. Roger’s Neighborhood. All the talking owls, cats, toddlers and tigers have human roles: postal worker, teacher, baker, and the music man.

What they don’t have are cars.

Other than the Speedy Delivery truck that delivers packages, everyone uses Trolley, an autonomous old-school trolley. Toddlers learn the value of waiting for the trolley, of what happens when they are late to the stop, and fellow passengers look out for each other–after they are buckled in, of course. The Land of Make-Believe has no automobiles–and life looks pretty good, judging by the catchy songs and the happy community.

…or in the Cities of the Future?

Today, American and European cities and municipalities have begun envisioning what urban areas might look like with fewer cars and alternative energy sources to lessen demand. As lawless urban sprawl turns into networked hubs via mass transit, it’s changing the way how people travel to and use the cities.

The city of Lyon, France, has decreased the amount of car use even as their population is growing:

The number of cars entering the city has fallen by 20% over the past decade, without even a congestion-charging scheme (Vesco says it would impose a disproportionate burden on the less well-off, who tend to drive higher-polluting vehicles). And even though Lyon’s population is expected to rise by more than 10% over the next decade, he is targeting a further 20% drop in car use. The car parks that used to run alongside the banks of Lyon’s two rivers have already been removed, and human parks opened in their place.

Closer to America, my city of Portland, Oregon, built a bridge over our main river that only allows mass transit, bikes, and pedestrians (and emergency vehicles), and one of the proposed highways instead became a walking loop around the city. A high percentage of shoppers and sporting event attendees ride transit instead of driving in. I don’t even have a car most days as I ride the mass transit to my church and most community engagements.

As cities improve their mass transit infrastructure, or rebuild their aging ones, the future is one with fewer cars, not more.

The Tesla Powerwall can store power from solar panels, from the electricity grid at night when it is typically cheaper, and provide a secure backup in the case of a power outage [which] could make solar-powered homes completely independent of the traditional energy grid…The goal is complete transformation of the entire energy infrastructure of the world, to completely sustainable zero carbon.

While it seems like alternative energy and mass transit are not linked, they are both shifts in the infrastructure of the country. And as infrastructure shifts, they will affect the political, social, and economic climates…and indeed the church climate as well.

With the increased politics around the decaying infrastructure of the nation and the need for better bridges, roads, and the arteries of America, there’s an opportunity for courageous cities to capture this entrepreneurial spirit of a carless and fossil-fuel reduced future–and I hope many of them do.

How will the Church respond?

The shifting infrastructure around energy and transportation will be critically important for the church to respond to.

In our history, some incredible times of church growth came alongside the shifting infrastructure of the day.

As we shift into the post-car age, how can the Church  adapt?

Some considerations for church adaptation:

Thoughts? Thanks for reading…how else is the infrastructure of the world changing–especially in America?