You are here: Home / Theology / christology / Paul cut the apple differently–and we can too.

By seeing one’s identity in Christ, one overcomes the tribalism of society. However, there is always the tendency to backslide into one’s tribe rather than embrace life alongside others in the New Creation of difference. 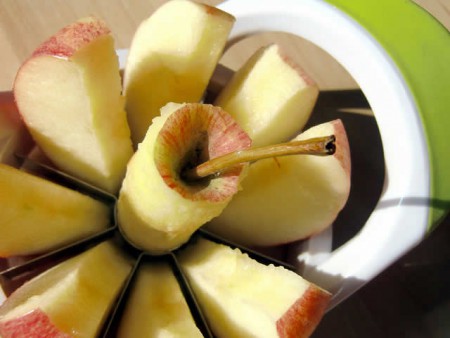 In the technology world, Facebook is defeating Google because it better understands what people want: people want to know who, not what.

We no longer want to search for the hair stylist with the best Better Business Bureau category. Instead, we ask our friends for their recommendations. We see where our friends check-in at, have left Yelp reviews for, and we go there. What matters is not initially the “what” (four stars on Zagat or the freshness on Rotten Tomatoes), but “who” went there.

I admit that when I see the links from certain people in my Facebook timeline or in my Twitter feed, I don’t read them or I already know how I’m going to react. I already know I’m not going to agree with a tweet from that person. I only have to look at the URL to know I won’t agree with it if it’s on that website. It’s very easy to glaze over the already-categorized in favor of the intriguing post by a new follow or a reliable post from a stalwart member of my tribe.

Our online habits reflect our society’s tendency to segment the world into echo-chambers that we choose to walk into from time to time. And in that way, we are no less different than biblical times when the divide between differences was stark.

Peter Rollins, in his book The Idolatry of God, writes about society’s separations and how Paul envisions Christ segmenting society in a different way. Rollins writes:

From birth, we experience a preexisting matrix of beliefs and practices that differentiate us from others…some of these divisions have deep histories that span multiple generations, while others are very new. (pg.102)

To many, Christianity was just another tribe amidst all the other religious tribes, to add more cuts to the fabric of society. But to Paul, Christianity was a very different cut that didn’t add to the divisions in society but instead eliminated them.

From Rollins’ book, here’s how society was divided before Christ came (referencing Galatians 3:28): 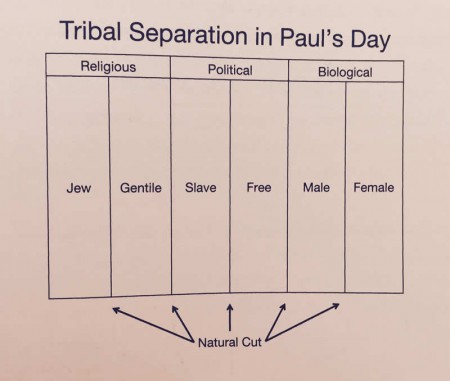 Excerpt from Peter Rollins The Idolatry of God

Instead of Christianity adding another cut to the religious identity, Paul believes an identity with Christ cuts across the entirety of society’s divisions. Especially after the debate in Acts about Peter and Paul extending Christ’s identity to the Gentiles, we see this understanding in action.

Here’s how Rollins sees the Pauline cut across society: 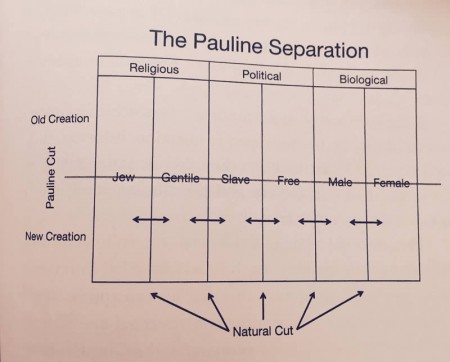 Excerpt from Peter Rollins The Idolatry of God

Instead of Christian identity adding another column to an already segmented society, Rollins draws from 1 Corinthians 7:29-31 to claim:

Paul understands this radical cut as emanating directly from one’s identity with Christ, for Paul understands participation in the life of Christ as involving the loss of power that our various tribal identities one held for us…this new collective exists within the old order and brings you into contact with others previously seen as “outsiders.” (page 107)

There’s still separation, but it goes against society’s tribalism instead of with it.

You can read more of Rollins’ writings on this subject here: “I do not bring Peace but a Sword“

Live into the Old or the New?

We see that Christianity is inclusive of all of society’s varied hues of the rainbow. Beliefs and customs are still important within each tribe and segment—those do not disappear—but they are held differently and do not keep a collaborative spirit from emerging across usually touchy differences. Like any religion that is not restricted to particular ethnicities, we see over time a strong diversity within Christianity overall, its own divisions non-withstanding.

Those who are excluded from the new collective signaled by the new creation are now those who exclude themselves—the ones who so wish to cling to their own identity that they are not prepared to encounter another as anything but a stranger to convert, an alien to tolerate, or an enemy to crush. [Rather] for Paul, it is this very loss of identity that identifies us with Christ. (pg.116)

We fall into this when we hold our segmented identities as trumping our common identity in Christ. When we rigidly hold to our tribes of orthodoxy, progressivism, traditionalism, liberalism, conservatism, and see all others as enemies to crush or to stiffly tolerate, we are unable to have conversations of mutual betterment or work together in a unity in diversity to solve society’s problems.

Society is anxious to keep its population in a segmented world. Segmented populations are easier to control, manipulate, market to, and distract. We see that in the relative extreme views of those who watch Fox news or MSNBC exclusively.

There will always be those who recognize the Pauline cut across society and yet who choose to live within the tribalism of the Old Creation. Such people deny that the New Creation means that our identity is in Christ forms a common bonding agent with people of difference. We bring our traditions, our tribes, and our identities with us into the New Creation, but they are held more lightly and do not define our actions or reactions in the same way.