You are here: Home / Geek Gospel / Religion and Doctor Who #GeekGospel 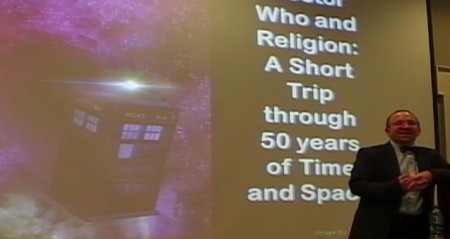 One of my favorite religion blogs is Butler’s Dr. James McGrath, as the Professor has the nigh-perfect mixture of biblical commentary, science fiction references, and humor. He’s a great blogger and I appreciate the quality and quantity of his work–he’s even liveblogging his way through re-watching LOST.

Recently he posted a one hour lecture he gave on Doctor Who and Religion.  While I’m not a Whovian, it’s a good speech for those who are. Plug in the headphones and jump right in (yes, the video is missing the first 30 seconds of his speech).

Hope you enjoyed it! Thoughts on the content, those of you who know who the Time Lord is?