You are here: Home / Geek Gospel / Order of Worship for #StarWars Sunday: May the Fourth Be With You 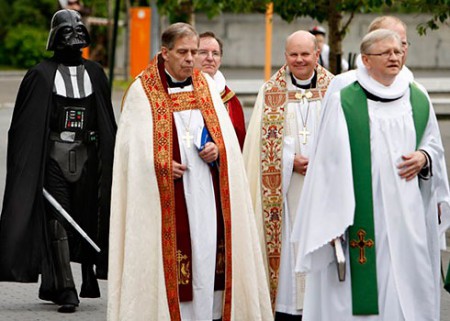 This coming Sunday is May the Fourth. Many congregations are unaware that it is a High Holy Sunday, with an ancient liturgy commemorating it as Star Wars Sunday: May the Fourth Be With You.

I am sure that everyone wants to commemorate it. But I suspect that many congregations are lost in the woods of Endor without a speeder-bike. It is hard to decide how best to use authentic Jedi hymns and have a message that is relevant to the people while being accurate to the Star Wars universe at the same time.

It can seem like “It’s a trap!” But fear not, youngling!

Here’s an annotated template for an Order of Worship in the Star Wars tradition that would be wholly appropriate for May the Fourth (be with you). It also has suggested hymns (with themes relevant for the time in worship) and suggested sermon topics. All you need before you go bulls-eyeing womp rats in your T-16 back home in Beggar’s canyon!

Call To Worship [recitation of the Jedi/Sith Codes, found on page 12 in the Book of C-3PO Prayer]

Sith Worship service: Peace is a lie, there is only passion. Through passion, I gain strength. Through strength, I gain power. Through power, I gain victory. Through victory, my chains are broken.

O Force, Binder of the Universe,
Who gave life to us through midi-chlorians and sustained us through the Emperor Palpatine and Order 66,
Do continually spur us to offer something more than a hokey religion and ancient weapons,
Through the Redeemed Anakin Skywalker we pray, Amen.

Pastoral Prayer [for all species; unless this is an Imperial service, then humans only]

Scripture & Psalter [Following the Revised Common Lectionary of course…what are we, Ugnaughts?]

Responsive Hymn [remembering the conflict of The Empire Strikes Back]

Suggested Prayer:
“For Luke so loved the Force that he gave his only begotten hand,
may we also sacrifice in lesser ways to emulate his devotion.
May our lack of faith never be found disturbing.”

May the Force be with you.
And also with you.
Lift up your hearts.
We lift them up to the Force.
It is right to give our thanks and praise.
So say we all (Err…this must be an ecumenical service)

[After liturgy, the congregation is invited to share the bread and blue milk via intinction. Leftover host is to be flash-frozen into carbonite for distribution later–except for Methodists who reject reserved Sacrament]

Recessional Hymn [commemorating the triumph of The Return of the Jedi] 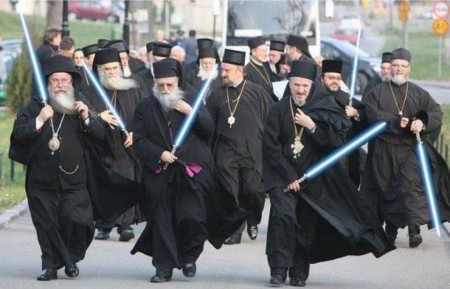 Please share with your friends and make sure your pastor knows about May the Fourth!