You are here: Home / UMC / No Large Southern Church Left Behind #CallToAction

In Virginia Bassford’s book (which is recommended reading for General Conference) she states:

V. Bassford Lord, I love the Church and We Need Help, page 35.

One of the newest developments in the Call To Action conversation is that the pastors of the largest churches sent an open letter to General Conference delegates. It’s nice. It talks about the death tsunami and the coming doom and gloom of the UMC, the inefficiency of the General Boards, and the graying of the clergy. It asserts a need for organizational change so that the church can be focused on nurturing vital congregations. All boilerplate CTA stuff but worded in a way that even my skeptical young clergy friends are signing it.

But as I was reading Bassford’s book, that quote jumped out at me as I read the original signatories to this open letter, purportedly the pastors of the largest churches in the UMC. “Hegemony”  means a dominant group that thinks alike. Now, each of these churches has grown and they meet regularly to learn from each other how to continue growing, so they clearly think of their churches in similar ways (at least on a spectrum, they would be together). And that’s fine, we want our churches to grow and it is great to learn from leaders that have grown their churches effectively. I don’t mind this hegemony group.

But as I read the signatories, I began to wonder if there was a regional hegemony as well in the Call To Action.

When we map the 87 clergy originators of this petition on Google Maps), we get a disturbing trend as far as how many signatories are from one area of the country. (here’s a map of the jurisdictional breakdown [or PDF here]): 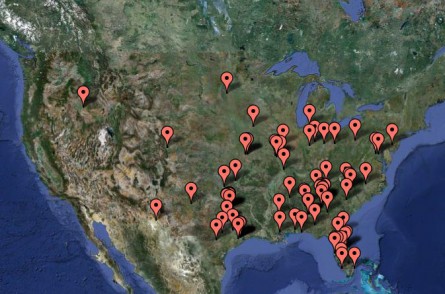 So the Southern jurisdictions have nearly 5x the number of crafters to the letter than the other regions combined. That immediately put up a red flag for me. It becomes very difficult to not be disturbed when the recommendations coming from these churches represent the population density but not the vast diversity of the United Methodist Church.

Often people say “well, the smaller numbers are because of smaller populations. Not so. If we do the delegate-to-signatory ratio, the Southern Juridictions still come out on top (delegate totals PDF):

So the signatories and pastoral leadership of the Open Letter are overwhelmingly (a) large churches (b) Southern churches and (c) disproportionate in voice to their population in the UMC. Like No Child Left Behind, the Call To Action is supported by those churches that will seem to benefit the most by lower apportionments and less “official” resources to compete with the sales of their regional resources (ie. Hamilton’s resources, Mike Slaughter’s resources, etc). We’ve seen in the responses from the African Students and the Ethnic Caucuses that the reorganization plans are not on the line with ministry to these groups, and indeed take some money from these mission fields.

It really doesn’t matter if we map this trend out. Because no matter what we say or do, the Southern jurisdictions will prevail on this issue. 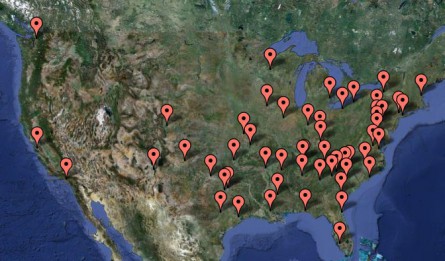 UPDATE: Jared below mentioned that I didn’t have the central conferences in my numbers, so the above has been updated to reflect that. Thanks Jared!

But isn’t it a symptom of hegemony that a hegemony wants more power? Case in point: Robert Sparkman, drawing on the data from Joe Whittemore (Plan B Originator), decries the “unfair” distribution of delegates at GC2012. He says:

Areas which have grown are again under-represented. Some of the growing conferences have had their delegations reduced. Whenever an area is under-represented it threatens the legitimacy and support of the connection.

In my annual conference of Oklahoma, we lost ONE delegate slot (one clergy, one laity) out of 10. Whooptie. I know that it irritates the Southern Jurisdiction when they lose a handful of delegates and Africa gains a ton of delegates, but the answer isn’t to remove more delegates from the places that are even smaller. I completely disagree with Sparkman when he says:

We needed to represent more fairly and strongly the vision of the growing and vital areas of the church. Each General Conference of the last three has affirmed that we need to hear the voices of Africa and the growing conferences of the United States.

In my opinion, if we are to avoid becoming a sectarian church with a power base in the South, then we need to legitimize the mission field voices. We cannot just reward success with more representation: they already have that. The Southern Jurisdictions can have their way with anything in the UMC with only a modicum of support from the global church. Instead, why aren’t we valuing the voices from the margins, from the extremes, from the areas of the country where slow growth is the norm? The creeping secularism will reach the South one day, and if they do not empower the churches already in this culture to deal with it now, then the South will be under-equipped to deal with it later. As Bassford says, “we each have distinctive points of view. Together, we can have a wide-angle outlook.” We can weather this storm together, but only if the hegemony opens itself to its role of guidance, not dominance, in the global church.

So, in conclusion, my contention is this:

I don’t want to see our church go the way of the Southern Baptist Church that became a regionalized center of influence that became more and more insular to the point that their hegemony took over the SBC and removed the women and progressive voices.