You are here: Home / Church Talk / discipleship / Could Discipleship be an RPG? 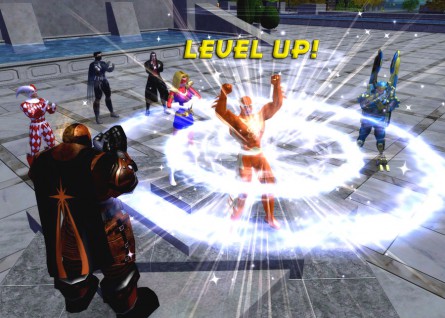 Perhaps the popularity of online games is not about the specific success of particular games but about the gamification of our culture: if we make something a game, then it changes our habits.  This is becoming more and more part of our culture. For example, two years ago Weight Watchers launched an online tool to better track the point-value of foods and seemed to turn it into a game.

Think about it. As with an RPG, you roll a virtual character, manage your inventory and resources, and try to achieve a goal. Weight Watchers’ points function precisely like hit points; each bite of food does damage until you’ve used up your daily amount, so you sleep and start all over again. Play well and you level up — by losing weight! And the more you play it, the more you discover interesting combinations of the rules that aren’t apparent at first. Hey, if I eat a fruit-granola breakfast and an egg-and-romaine lunch, I’ll have enough points to survive a greasy hamburger dinner for a treat! [boingboing.net]

For some people if you make something a game, then it becomes easier. I know this because I had a problem of driving too fast and accelerating too fast. But then our family got a Prius (blog post: Pastor in a Prius) and my miles per gallon would go down if I did those gas-guzzling tactics. Every 5 minutes I could see if I was saving money or losing it. And it changed the way I drove: because it became a game to sustain 50mpg.

From gamifying homework to turning work into play to iPhone apps that make to-do lists into an RPG, it is clear that gaming (and especially social gaming) has started to creep into the mundane parts of our lives as a form of motivation. This isn’t just a distraction from the world’s problems ala ancient Rome’s use of Gladiator games, but is about fusing work and play so that we work harder and longer for tiered rewards. The question remains: should we?

Kotaku dived into this conversation with a great titled article (Video Games Keep Us Doing Things We Loathe) and contributed this thoughtful quote:

But “gamification” is a concept that’s here to stay; the positive view is that applying proven game design concepts to some of our least-favorite or most tedious life tasks can make us more productive and help us have fun doing it. The negative view is that we’ve become so dependent on designed interaction, compulsion loops and receiving positive feedback for everything that we can’t just exist spontaneously, that we need to be “tricked” into achieving. [kotaku.com]

That last line is clearly a social force that works against the church. The temptation to trick people into participation or lure people to participate with rewards is tedious territory. Of course when one serves in a mission project or attends church they get a “we are thankful you are here” which feels great. When a youth helps serve a dinner because the workers get to go bowling afterwards, they are being rewarded. The question is are there ways to use gaming concepts in the church or are the church and gamification incompatible?

One approach is to embrace gamification: a church can put into place practices and policies that put the carrot before the horse so we will pull the cart.  There is little doubt that discipleship can be made into a game. While this can be done well, I have mostly memories of negative attempts. For example:

The other approach is to reject gamification. For United Methodists, there’s a strong Wesleyan basis for rejecting this type of evaluation and persuasion: we believe in Prevenient Grace. This means that God has already rewarded us with God’s unmerited love! We have already saved the Princess, we’ve already found the Triforce, we’ve already become a level 99 elf-lord. All that remains is to acknowledge the gift, believe in Jesus Christ, and then do good works that flow from that faith. At its core, Wesleyan Grace is antithetical to gamification, because the horse already has the carrot and pulls the cart anyway out of gratitude.

By preaching and building this understanding of how God recognizes humanity into the church structure and teaching (and for goodness sake, stop the gold stars in the classrooms already!), one has planted the seeds to resist a gamification of the church.At the essence of a gamed sense of discipleship is that by undertaking unpleasant actions one can achieve greater merits, be it a chairmanship, classroom teacher, spousal approval, on up to Eternal Life. But we have already achieved the reward, and now the goal is to do works with an unwavering sense of joy fused with the action. So at their essence, gamed discipleship is not Wesleyan discipleship.

In closing, Kotaku had this other paragraph that bears mention:

It’s a funny principle that keeps us driving at thankless tasks for long-term payoffs. The motivator there is perpetual dissatisfaction – you want more than what you have, you want to be better than what you are, and if you focus and work hard, you’ll reach incremental payoffs on your way to that goal. But I often wonder if that’s genuinely meaningful. People have used the heavy word “addiction” to describe the compulsion to keep checking off little tasks in games like World of Warcraft or Farmville. Comparing games to drugs may be heavy-handed and flawed, it’s true that many gamers have found themselves unable to put a game down even when they can’t identify that they’re enjoying themselves. Isn’t that a dark thought? [kotaku.com]

Perhaps the moment for each one of us to consider is when one can’t identify why they are not enjoying themselves. Why can’t I get up for church? Why can’t I seem to connect with our evangelism campaign? Why is it hard for me to get motivated to attend choir practice? Perhaps the problem isn’t really in any of those flawed institutions, but in our own sense of “why isn’t a gaming tenet of being rewarded for work doing it for me?” Being reminded that we already have the reward and figuring out how to fuse that joy with the works we perform is a conversation that might need to be had.

At our best, we are not a people driven by perpetual dissatisfaction. We are a people driven by knowledge that God loves us and wants the best for us, including a firm desire to serve God and neighbor. Gaming may have its place in transitioning people from a gaming culture to an authentic faith, that’s not in question. But to encourage a gamed sense of discipleship, of achieving rewards, at the highest levels of the church, from the pulpit to the pew, I think that’s the road to perpetual dissatisfaction.