You are here: Home / UMC / John Wesley thought the Nicene Creed was Weaksauce 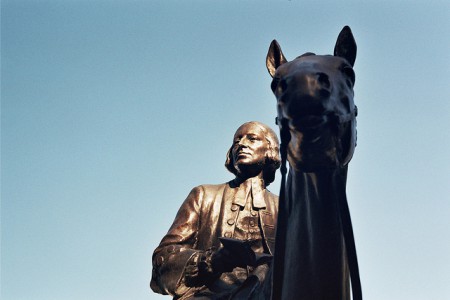 I watched a fascinating exchange on Twitter last week. One person posted:

The UMC must listen to Tom Noble: “When they abandon Nicaea & the Reformers, they cease to be ‘mainline’ & become sidelines.”

The quote is from Tom Noble’s 2010 address to the Wesley Theological Society. But the twitter response was very interesting:

[The UMC] never had Nicea or the “reformers” (Luther, Calvin) as doctrinal standards. Wesley omitted the Article on the Creeds.

When the Methodists of the former colonies (at the time the newly formed United States) began to plan for a Christmas Conference in 1784, Wesley sent them an abridged version of twenty-five articles which were adopted at said conference.

One of the Articles rejected by Wesley was this one:

Article VIII Of the Three Creeds
The three Creeds, Nicene Creed, Athanasius’ Creed, and that which is commonly called the Apostles’ Creed, ought thoroughly to be received and believed; for they may be proved by most certain warrants of Holy Scripture.

While we have no rationale by Wesley as to this decision, he clearly did not view them as essential to his movement. Even the claim that Wesley didn’t include them because he assumed everyone was on the same level wouldn’t preclude him from including the Article. There must have been some other reason why. Perhaps a reading of Wesley’s sermon A Catholic Spirit gives some insight, as Randy Maddox explains (PDF):

This is not to suggest, however, that Wesley equated the Thirty-Nine Articles with the “essentials.” In the first place, he doubted the scriptural or traditional warrant for some things contained therein, as became most evident when he abridged them for the American Methodists. In the second place, like all confessional creeds, the Articles were dedicated to articulating distinctive Anglican claims, not just summarizing shared Christian beliefs. As such, they gave focused attention to some issues that Wesley generally denied were essential—such as church government—while barely touching others that he was prone to consider such—like questions of ethics. Obviously, some further criterion was being invoked in making such distinctions among the teachings of the Articles.

I think the introduction’s exchange is a telling one, especially given that it originated by one of the proponents of the Neo-Wesleyan #andcanitbe movement that would seek to define (by a creedal assent) who could contribute to write about Wesley. Such a movement purports to seek to be authentically Wesleyan, but if so, they need to come to terms with that Wesley was not as Creedal or even as systematic as his followers today want him to be.

And there is a danger in re-imagining Wesley as more creedal than he was. As Maddox concludes:

Thus, a central aspect of Wesley’s catholic spirit was the desire to overcome that lamentable denominational zeal which becomes so consumed in defending its distinctive claims that it overlooks the broad areas of shared beliefs with other Christian groups.