You are here: Home / UMC / The WJ Case for Bishop Oliveto – Electability 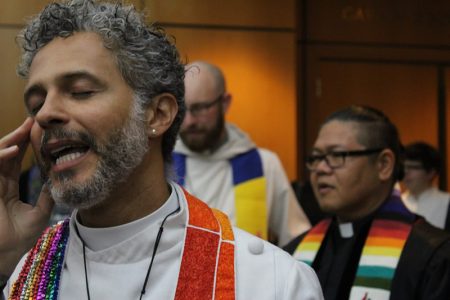 Bishop Karen Oliveto was an elder in good standing when she was nominated, elected, consecrated and assigned as a bishop of the United Methodist Church. (For the showing on “elder in good standing”, see the Briefs of her nominating Annual Conference – Cal-Nevada; and the WJ Committee on Episcopacy.) Under the 2012 Discipline, this ought to be the end of the inquiry. There was and is no requirement or provision under the Discipline that an elder in a same-sex marriage is automatically disqualified from nomination, election, consecration and assignment as a bishop in our Church.

We know, and this Judicial Council has so held on several occasions, that nothing in the Discipline bars a person with a same-sex orientation from the ordained ministry. See, JCD 1027 (2005) and JC Memo 722 (1994). Thus, nothing in the Discipline bars an elder in good standing with a same-sex orientation from the episcopacy. The issue is not and has never been sexual orientation. The issue has always been about “practice” and the manner in which “self-avowal” occurs. And the precedent for “practicing” is found in Decisions 920 and 980. Neither of these Decisions speaks to marriage as evidence of “practicing”. Instead, as you know, the benchmark for “practicing” is genital sex.

Marriage is not Disqualifying

The SCJ (Brewster) Opening Brief at Footnote 3 attempts to sidestep the law and precedent on “practicing” by saying that an elder has no guaranteed right to be elected bishop. The Footnote goes on to say that Bishop Oliveto retains for another day her presumption of innocence and all of her fair process rights. The Footnote wants you to convict on the basis of a public document – the marriage certificate. This Footnote confuses the issue. Remember, the disqualifying language is “self-avowed practicing homosexual”. And proof of that disqualification must be shown in the manner provided for in the footnote Discipline. (See, footnote to ¶304.3.)

The act of marriage is not about sex or the practice of sex. We recognize this principle about a heterosexual marriage under ¶161B where the marriage is blessed even though there are no children by the marriage.

This is the unstated assumption behind the SCJ Request for Declaratory. You cannot put the cart before the horse and disqualify a candidate otherwise in good standing on the assumption that a same-sex marriage carries with it a per se assumption or belief about having sex. If this Judicial Council makes that assumption, it violates years of its own precedent regarding the presumption of innocence, the absolute right to trial and the nature of proof required on the question of “practicing”. The Council will also be creating a law where none now exists.

For the same reasons, a public record evidencing a same-sex marriage carries no assumption regarding what the married couple does or does not do while married. Neither does a public record satisfy the “self-avowal” standard created by the General Conference in the footnote to ¶304.3. If the fact of marriage carries unstated assumptions, and if “arguing” was a chargeable offense, all of us who are married, whether same-sex or heterosexual, would be guilty. The point is this Council is not a fact finder and cannot entertain unstated assumptions regarding the fact of marriage.

Bishop Oliveto was an elder in good standing at the times of her nomination, election, consecration and assignment as bishop. The WJ duly elected and assigned her. The WJ College of Bishops duly consecrated her. End of inquiry.