You are here: Home / Church Talk / church growth / What the Church can learn from Hillary Clinton

One pundit’s take on how Hillary Clinton won the Democratic primary yields a fascinating parallel to the Church. 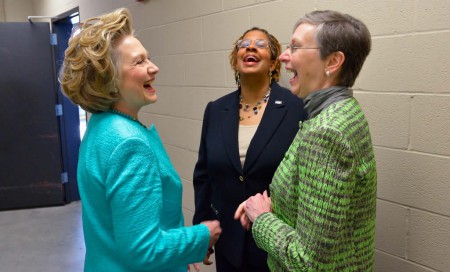 A Candidate unfit for the system…

Today is a historic day in American politics. My daughters will grow up in a world that expects women can vie for the most powerful political office in the world. While I’m certainly not going to vote for Clinton because of her gender, I recognize the importance of this day. 100 years ago, a woman couldn’t vote for who was to be President; today one is nominated to be one.

People will analyze for months to come how America finally came around to nominating a woman that seems to always favor men. Indeed, the analysis and pundits have already begun.

One such analysis comes from Ezra Klein writing on Vox.com where he details an intriguing insight into the Clinton campaign: it was actually unconventional because the candidate ran as a woman in a system that prefers men:

Clinton employed a less masculine strategy to win. She won the Democratic primary by spending years slowly, assiduously, building relationships with the entire Democratic Party. She relied on a more traditionally female approach to leadership: creating coalitions, finding common ground, and winning over allies. Today, 523 governors of members of Congress have endorsed Clinton; 13 have endorsed Sanders.

This work is a grind — it’s not big speeches, it doesn’t come with wide applause, and it requires an emotional toughness most human beings can’t summon.

But Clinton is arguably better at that than anyone in American politics today…And Clinton isn’t just better — she’s relentless. After losing to Barack Obama, she rebuilt those relationships, campaigning hard for him in the general, serving as his secretary of state, reaching out to longtime allies who had crushed her campaign by endorsing him over her. (This, by the way, is why I don’t think you can dismiss Clinton’s victory as reflections of her husband’s success: She’s won her own elections and secured a major appointment in a subsequent administration.)

We see that in the end, the political system that rewards charisma, speeches, sound bites, and personalities was overcome by two decades of relationship-building.

[I]n order to do something as hard as becoming the first female presidential nominee of a major political party, she had to do something extraordinarily difficult: She had to build a coalition, supported by a web of relationships, that dwarfed in both breadth and depth anything a non-incumbent had created before. It was a plan that played to her strengths, as opposed to her (entirely male) challengers’ strengths. And she did it.

When the game is set against you, then you change the game. All of Hillary’s known faults caused her to rely on what she had that no other candidate did: a value of relationships at a level unheard of for a non-incumbent.

A church unfit for the culture…

Clinton’s success in the primary makes me wonder if a similar type of relational approach is needed in today’s Church.

Christianity that is popular in America is very similar to the qualities of male secular politics: big sermons, big stages, focus on numbers (both as signs of growth and signs that “one is better than the other”), and rigging the system against women’s voices. Even in denominations that are egalitarian like The United Methodist Church, women do not pastor the big churches, primarily because big churches are pastored mostly by their founding pastor–and women are not often sent to plant churches in the most viable areas.

Especially in these polarized times, the loudest voices with the big-budget productions get the most people in the pews and dollars in the plates. The system perpetuates this male-dominated (and male-reflected) qualities set.

So for those of us (male and female) who are unfit for this big consumer culture-driven Christendom, how do we compete?

Perhaps we do it the Hillary Clinton way: by focusing on relationships.

The book Slow Church, by Smith/Pattison, is a treasure trove of this kind of relational church. They talk about how instead of participating in the fast-food version of Church, we are better suited to slow church down and experience it.

We can grow fast, or we can grow slow. And if you aren’t equipped with a gorgeous worship leader or a charismatic preacher, you can still grow but you need to grow through relationships. It’s a long game, but it pays off in the end. As Smith/Pattison write:

“[Our minds] were given to us for another purpose: to raise to awareness the communal reality of nature, to overcome separateness and alienation by a knowing that is loving, to reach out with intelligence to acknowledge and renew the bonds of life.”

When the church game is set against you, you play a different game with the same goal of glorifying God and following Jesus Christ in lived-out relationships.

Practicum: Start with the Questions

Instead of building a multimedia empire of attractional models of Church, maybe we need to go and start asking the questions:

By doing the quiet work that isn’t as flashy, you may not feel the heat of the stage lighting every Sunday, but you’ll feel the warmth of relationships that endure.