You are here: Home / UMC / Schism / All In: Bishops Gambling On The Middle Against Both Ends #UMC

The “Unity until a Commission Report” by the Council of Bishops move benefits all sides and allows the middle of Methodism to guide the conversation. 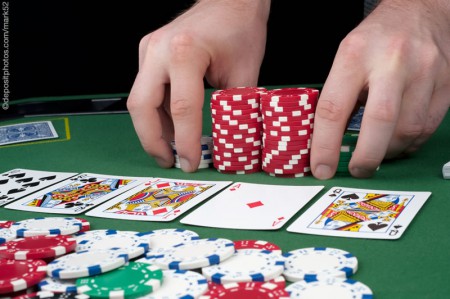 Lead Up to the Play

Today, here’s the proposal. Here’s the essential part of it:

We recommend that the General Conference defer all votes on human sexuality and refer this entire subject to a special Commission, named by the Council of Bishops, to develop a complete examination and possible revision of every paragraph in ourBook of Discipline regarding human sexuality.  We continue to hear from many people on the debate over sexuality that our current Discipline contains language which is contradictory, unnecessarily hurtful, and inadequate for the variety of local, regional and global contexts.  We will name such a Commission to include persons from every region of our UMC, and will include representation from differing perspectives on the debate.   We commit to maintain an on-going dialogue with this Commission as they do their work, including clear objectives and outcomes. Should they complete their work in time for a called General Conference, then we will call a two- to three-day gathering before the 2020 General Conference.  (We will consult with GCFA regarding cost-effective ways to hold that gathering.)

GC will consider this soon, so here’s some initial thoughts.

For folks who were expecting a proposal for schism, understand who benefits from a schism. In an amicable separation or schism, the people who benefit the most are the ends of the spectrum: the left and right wings of the church. While “extreme” is not meant as derogatory towards their views, their positions would both be at the polar opposite points of the spectrum within The United Methodist Church.

We reward the extremes in The United Methodist Church. We give news coverage to outrageous acts or statements. We elect as delegates those who best represent the dominant caucus groups. And so the people who most call for schism are those from the two ends that are most unable to reconcile their convictions or their ability to do ministry with the current situation.

In a schism situation, the ones who are the loudest voices are the ones who benefit the most because they are able to form a new denomination in their own image, which may or may not be the best plan that God has for The United Methodist Church.

What the Bishops are instead proposing is a tenuous unity for a set period of time, which benefits the majority of Methodism: the middle, ie. the “centrists” who hold neither extreme beliefs and are comfortable in the middle. That is not to say these are people without conviction or without restrictions on ministry–they certainly are. But they do not gravitate to either end. In a unity situation, the middle keeps happy because they find fulfillment from being together, not from holding one view over the other, as incompatible as they may be with each other.

We see then that the two extremes are against the middle: they both pull the middle towards their side or the other. But the desired ends of the extremes do not always have the values of the middle at their heart: a unity in diversity.

It seems to me, as someone who has opposed schism and yet resides often at the end of progressive conviction, that this motion does not satisfy my convictions, but neither does it violate them in unacceptable ways.

“Anxious organizations have difficulty affording the space to anyone or to listen to the leading of the Holy Spirit.” Bishop Ough

It is unfortunate that General Conference falls on American election years, with the partisan conflict at record highs as The United Methodist Church deliberates as a body while Donald Trump leads the headlines.

I think this proposal removes the anxiety of General Conference and gives time and space to a special commission in a way that will be helpful. While General Conference has voted down every single official study of homosexuality, this is a different time and a group which may have more buy-in than the previous commissions and studies.

However, it also removes any “tightening of the noose” that passed in legislative committees this past week. So that’s a helpful way to allow a patchwork of ministry to continue in The UMC without it becoming even more retributive.

Finally, the same delegates to General Conference 2016 would be part of the special called Conference. That’s the rules. So the people who had an experience of this conference would, for the first time in our history, be in charge of deciding this 2-3 year discernment process. That’s a long time for hearts and minds to come together, and one that helps the Middle find a path together.