You are here: Home / UMC / How Big Data disrupts Narratives of #UMC Decline

Big Data in the UMC challenges the narrative of decline “due to progressive Christianity,” and shows what role each of us is to play to handle the coming winnowing of the church. 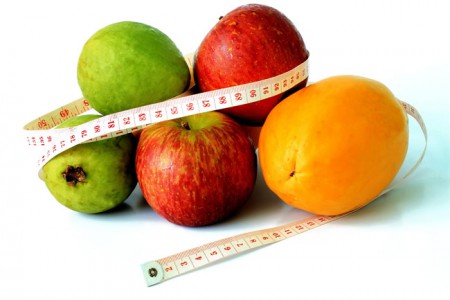 Recently the data for 2014 came out on the United Methodist Church in America, showing a 1.6% drop in membership and 2.6% drop in attendance across the board. I’m thankful to be part of an organized church tradition that gathers and publishes data so geeks like me can read it.

The Good News Movement, a conservative advocacy group in the UMC, was first out of the gate with an analysis penned by Walter Fenton. The expressed reason given for this decline is, oddly enough, remedied by the goals of the advocacy organization:

A variety of reasons are given for the declines in membership and worship attendance. Aging church members and local churches located in sparsely populated areas are often cited.

While not dismissing these factors, conservatives maintain the declines can also be attributed to a church that has drifted from its core theological teachings, a lack of evangelical zeal, and the loss of members who have grown tired of the decades long debate over homosexuality. Some progressives counter that the church’s failure to liberalize its positions on the practice of homosexuality and same-sex marriage has repelled the youth and young adults necessary to replace aging members and worship attenders.

I feel for the renewal groups, I really do. Their task is tough. They have to show that returning the Methodist Church back to the expressed doctrine of pre-1956 will cause the church to grow again. That’s the narrative they use time and again in fundraising letters and online writings, and it’s repeated above.

However, the data doesn’t support the narrative. But it’s only by going beyond the commentary to the actual numbers that we can see it. Thankfully, you are reading this blog and can see for yourself what is going on.

One of the comments made by Good News was that the progressive Western Jurisdiction, as always, is dragging down the rest of the UMC:

The North Central Jurisdiction saw the largest drop among the five jurisdictions with a 3.7 percent decline. The Western Jurisdiction followed closely behind, where the decline in worship attendance was 3.4 percent.

The quote illustrates how percentages can hide the really important numbers, especially the ones that have a massive impact on the Church.

While the West percentage-wise is worst among the jurisdictions, they account for only 6% of United Methodism in America, so a percentage drop is not a large number. How about the jurisdictions that hold a larger number of Methodists? Let’s see: 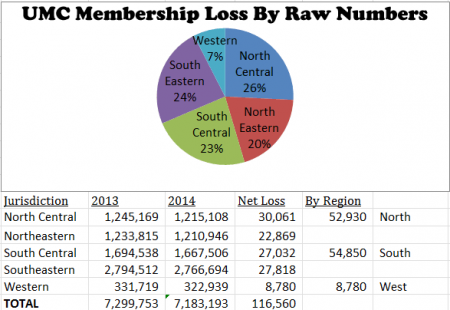 Wow, so the North and South lost over 107,000 members in one year. And yet the Good News points fingers at the West for dragging down the rest of Methodism? tsk tsk 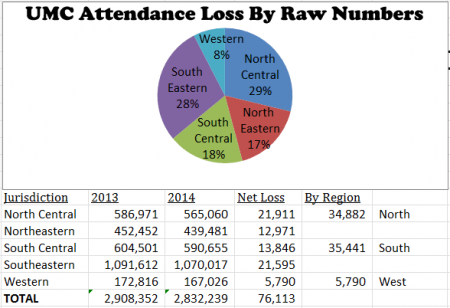 Same. Though North Central is in pretty bad shape.

In summary, the raw numbers* tell a different story: there’s a massive loss of members and attendees in the South, which is traditionally seen as the bastion of conservatism (though that is slowly changing). When one’s narrative is that the more conservative Southern jurisdictions’ upholding of “core theological teachings” yields growth, it is hard to prop that up in the face of numbers. Percentages matter and tell a story, certainly; however, the raw numbers tell a very different story of the collapse of Christendom in the Bible Belt.

The fields are ripe!

Rev. Duane Anders, senior pastor of Cathedral of the Rockies in Boise, Idaho, was at Annual Conference 2014 with me in Oregon-Idaho. When the Board of Ordained Ministry indicated a low number of Ordinands that year, he tweeted the data with the comment “The Fields Are Ripe!” I’ve held his quote in my heart as Duane exhibited joy at the abundance of opportunity in the West.

I also see the abundance and, when percentages are used properly, can see successes in my region of the West. One measure of discipleship is traditionally how many members actually attend church. We can measure that, in part, by seeing what percentage of the members attend church on an average Sunday. When we break that down by jurisdiction (using the numbers above), we get:

There’s a difference between quantitative and qualitative church growth. I know the North and South are bigger quantitatively, but as I’ve shown before, the West might be stronger qualitatively. In the West, we’ve hit on at least one success: how to have a higher percentage of our members actually attend church. And that’s a joy that could be shared with other jurisdictions, and it must: Every challenge we overcome in the West is one less that the South will have to deal with when the collapse of Christendom comes to their doorstep.

The joy for the Church is that the South has the West and North, and we are all in this together, and even the smallest most-picked-on Western Jurisdiction has something to give. This wave of secularization began in our regions and is creeping towards the Bible Belt. In the coming years, the Bible Belt will look to the lessons learned by the North and West to help them ride the wave better than we did. Efforts to eradicate the Western Jurisdiction would be cutting off this testing-bed of ideas and approaches in the future of the whole Church–and should be roundly opposed at General Conference 2016.

My hope is that we take an honest look at the data and see what role each jurisdiction plays in the whole of the United Methodist Church, and instead of picking on each other, lift each other up to play those roles the best we can, for God’s Reign on earth to be made real.

* There’s a slight difference between the 2013 numbers then and the 2013 numbers now. The final numbers show a decrease of 98 members and an increase of 252 worshippers from the 2013 numbers used above. However, the corrected numbers are not broken down by conference or jurisdiction (at least in my GCFA-provided files). Given that, and since they are statistically insignificant, the correction was not included in the above numbers.