You are here: Home / UMC / For the #UMC, there is no way out but through [Guest Post]

Discussions about unity, schism, and what General Conference should/should not do is currently dominated by straight white males. Since last year, this blog has committed itself to bringing forward LGBT Methodist voices to its international audience. Even when I find myself in disagreement with LGBT voices, I am bettered by a diverse perspective that is truly the strength of the United Methodist Church.

Here’s one such perspective, reflecting on a proposed way “how” we are to discuss LGBT inclusion at General Conference. Since LGBT persons are more often talked about than talked with, I invited Dr. Benz to reflect on how the process felt to her and what we might do going forward. 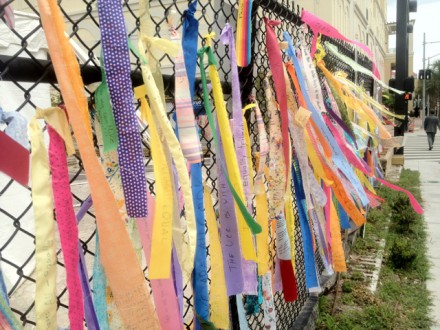 There is no way out but through

The proposed “alternative process” for discussing legislation about the UMC’s discrimination against LGBTQ people at the 2016 General Conference has left those of us who are queer, once again, acutely aware that we are seen as a problem for the church to solve, rather than as a part of the church.

I can vouch for the Commission on General Conference’s good intentions in making this proposal, as I was one of a number of people invited to discuss it with the commission before their decision to adopt it. Nonetheless, its primary effect is institution-preserving and not justice-enabling, and it runs the risk of increasing the harm done to LGBTQ people at General Conference.

The intent to separate out and treat differently legislation that concerns the lives of LGBTQ United Methodists from all other United Methodists is troubling; it pretends that LGBTQ people can somehow be neatly quarantined and discussion of our fate kept from contaminating the rest of General Conference. To state the problem in this way is to make its offensiveness obvious. The truth is that LGBTQ United Methodists, while singled out for stigma and discrimination, are an integral part of our church and cannot be excised from it for purposes of legislative debate.

What about legislation that calls for action from the UMC against hate crimes? Will we relegate it to the alternate process because it mentions hate crimes against LGBTQ people, and thus also segregate the concerns of people of color, immigrants, people with disabilities and others who are victims of hate crimes? Is a petition that calls for the church to take a stand against police violence, an issue that affects Black, Brown and Queer people, going to go to this separate process, or will it be considered with other church and society legislation? Where will we discuss the lethal epidemic of hate violence against trans women of color in the U.S.? What about the crisis of homeless queer youth – will this be discussed with broader issues of homelessness and economic crisis, or will it come through the alternative process? These are pressing issues in LGBTQ communities, and should be pressing issues for he church. What about legislation that calls for greater inclusion in the UMC by strengthening rather than eliminating GCORR and COSROW, where does that go? Do queer people of color and lesbians have to bifurcate their identities into separate compartments?

LGBTQ people are whole people; our concerns cannot be segregated from other concerns in the church.

(And what about all the structural proposals floating around the UMC? As Jeremy Smith put it, “We cannot escape the reality that all these unity or schism plans are really all in response to the question of LGBT Inclusion in the life of the Church.”  Will they be discussed in the alternative process?)

The biggest problem with the proposed alternative process is that it removes a significant and critical segment of the General Conference’s debate from view and thus from accountability. It proposes to replace the entire committee process on issues concerning the church’s stance towards LGBTQ people. Unless the proposed small group and facilitation group discussions are all open to observers and media, the way the legislative committee sessions are, the fate of LGBTQ people in the UMC will be decided in significant measure entirely out of public view.

The elimination of the entire committee process for legislation that will decide whether or not the church continues to discriminate looks very much like an effort to remove this embarrassing discussion from public view.

There is a saying, from a different spiritual tradition, that applies here: You are as sick as your secrets. The UMC is plagued by ongoing prejudice and discrimination against LGBTQ people, and it is challenged by its deep divisions over the sinfulness-versus-godliness of this bigotry. But the way to deal with these problems is not by hiding them from public view and accountability. In the words of Martin Luther King:

“Like a boil that can never be cured as long as it is covered up but must be opened with all its pus-flowing ugliness to the natural medicines of air and light, injustice must likewise be exposed, with all of the tension its exposing creates, to the light of human conscience and the air of national opinion before it can be cured.”

A grave concern about this process is one I and others raised repeatedly with the commission: How will the commission ensure that LGBTQ people are protected from potentially even greater harm than we have endured at past General Conferences, where we were subjected repeatedly to hate speech? Without observers and media, LGBTQ people in small groups will be more vulnerable to attack, just like the target of bullies is more vulnerable in an empty alley than a crowded hallway. The commission has made much of the possibility that this alternative process will increase participation in a critical debate in our denomination, offering a chance for the “middle voices” to be heard (though I confess, I do not know what exactly a middle voice between favoring discrimination and opposing it is). Greater participation is indeed a virtue, but it is worth considering that this process may in fact have the opposite effect – that it keeps LGBTQ people from speaking up at all, precisely because we find ourselves in an isolated alley of discussion rather than an open forum.

That this danger has not been addressed in the proposed process is symptomatic of a steadfast refusal throughout the denomination to recognize that in the context of discrimination and oppression, true dialogue can never occur. Genuine dialogue requires equality, and in the UMC that equality does not exist. One party comes to these conversations as defined as less than the other party – in the case of clergy, vulnerable to prosecution if they even identify themselves; in the case of laity, possibly exposing our allies to prosecution. No amount of vocal wishing for us all to act as “brothers and sisters together” changes that. Only with painful honesty about this reality, and concrete measures to counteract the power imbalance, is there even the possibility of constructive conversation.

Struggle is not to be avoided, but engaged

The search for an alternative process to deal with the UMC’s debate over discrimination reminds me of the current rage for structural reform proposals in the church. There is an almost desperate effort to avoid another General Conference showdown on the issue – from the progressive side, with the intent to escape the spiritual carnage and the damage done to LGBTQ ppl; on the institutional side, with the intent to circumvent the spectacle of unholy conferencing, the media attention and the logistical nightmare of delays and protests.  But all process proposals, like structural proposals, contain in them substantive consequences, consequences that will either perpetuate discrimination or dismantle it. What they will not do is resolve the church’s division over the issue, and the idea that we can somehow avoid a reckoning of the matter if only we find the right process or structural reform is illusory. As I have said elsewhere, “struggle is not something to be avoided; rather it is the crucible in which we create a better, more inclusive church. We need to engage in the struggle to change our church, not try to sidestep our way around it.”

Dorothee Benz is a lifelong United Methodist, a delegate to 2016 General Conference, and the national representative of Methodists in New Direction (MIND). She was at the April Commission on General Conference meeting at the invitation of Love Prevails, which was invited to the meeting along with the Methodist Federation for Social Action (MFSA) and the Reconciling Ministries Network (RMN).