You are here: Home / UMC / Only days remaining for Worldwide Nature of #UMC Survey 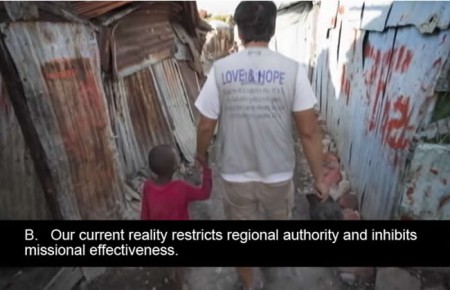 I believe one of the most critical (and far-reaching) points of conversation for United Methodists is the worldwide nature of the church.

This unique place in Christendom comes with great joys and some great challenges.

US-dominated polity for a worldwide church…

Rev. Jim Parsons, a clergy member in Western North Carolina, articulates why he recently found this to be an important topic to talk about in an epic post (quotes formatted for readability – he’s the only conversation partner for this post)

The UMC is truly a global denomination that is trying to figure out how to order, run, and grow that denomination in a global society. Our current Book of Discipline is centered on how to run the UMC in the US.

These are quick illustrations of the problem that is uniquely United Methodist.

In short, in our big book of polity is a ton of stuff that really only applies to the U.S.-based church. We spend days and millions of apportionment dollars at General Conference to vote on issues that only affect less than 56% of Methodism.

There’s got to be a better–and more equitable–way.

The point of a Global Discipline would mean that the essentials of what makes a UM church can be held up around the world. Yet how the local churches/regions then are ruled, governed and so forth are left up to those areas.  The idea of a Global Discipline would free up local churches in the central conference to figure out how to be the best UMC in their part of the world.

One of the primary forces of dissension to this plan comes from Traditionalists who are willing to have an unjust polity if it gets them what they want: continued rejection of LGBT persons. Here’s Jim one last time:

One concern our table had (during our discussions) is that this would seem like a ploy from the liberal movements to get rid of the African vote at General Conference and push more inclusive stance on homosexuality within the America’s UMC. This cannot be further from the truth. The idea of a Global Discipline has come from the central conference, those churches outside the US. They want more freedom to in order to organize their local churches with what makes sense for their part of the world…

But the bottom line is…

The bottom line is we are attempting to do something that is not currently nor ever been done before. We are bridging, building, and growing a global denomination run by democratic polity.

We are unique and we should take pride in this fact.

We should also recognize that if we want to succeed at this task, then it will take changes to our sacred Book of Discipline.

In short, this is an important topic, and I’m glad the UMC is asking for more feedback about it.

Fill out the Survey…like today!

One of the ways to give feedback into this process is to fill out a Worldwide Nature of the Church survey by August 31st. The survey has been out since May but I only recently noted it because up until now, I thought it was only for delegates to General Conference. However, I’ve got the official word that anyone can fill it out: just don’t check that box!

After the demographic questions on the first page, page 2 is the main topics. While they don’t ask about a two-book of Discipline, they do ask about having a conference over only the USA. They ask: “Where shall the UMC in the US “confer” on US-related matters for greater effectiveness in the mission of the church?”

Anyway, the questions are accessible, it’s only 13 questions, and they have something for everyone Methodist.

Take a few minutes, give some feedback (whether you agree or disagree with Jim above) and give the Connectional Table more data to consider for their November meeting in Oklahoma City (which is actually a joint meeting with the Council of Bishops as well).

Thoughts? Respond in the comments!