You are here: Home / Theology / Justice / Justice is not a Sprint. Or a Marathon. 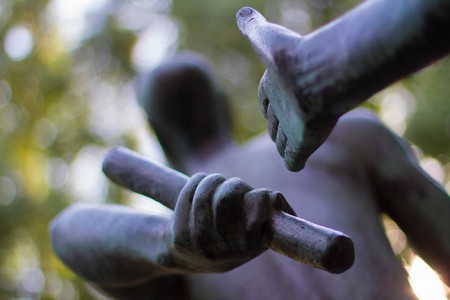 Whenever there are setbacks to those who seek a more just society, I often hear the phrase “don’t worry: justice is a marathon, not a sprint.”

Like most off-the-cuff comments told in the receiving line at funerals, the phrase sounds nice and reassuring, like MLK’s “long arc of history bends toward justice” quote. But to practitioners and active seekers of justice, it isn’t wholly accurate.

Seeking justice is not a sprint or a marathon. It’s not a short-term race that will be finished immediately, or a long-term marathon that has many setbacks and gains over time.

Instead, seeking justice is a relay race.

In a relay, several active participants are on the track together, each one taking a turn to run, and when they reach the end of their journey, they pass the baton to the next person, slow down, and watch them run their leg of the race. Only when the entire race is over, and everyone has run, is there celebration.

To those who seek justice, they are often unaware of the race until someone tells them. They notice the previous runner coming their way, shouting to take up the baton. They actually start running away from the baton, avoiding responsibility, but the baton catches up to them and is offered from one winded, dedicated generation, to the next one that is fresher, maybe less sure, but more able to carry the baton the rest of the journey.

We take the baton. We stand on the shoulders of those who have gone before us. And we run.

But we do not run alone.

We gather our community of supporters and advocates who seek the justice that we seek. We do not run alone, but with a whole pack of people. We look at the other teams, those whose agendas seem murky and their prowess at success seem intimidating. We are affected and affect the crowd, whose cheers indicate they too have caught the vision of justice, or whose silence means complacency has won this leg of the race.

And as we run, our minds are filled by the questions of the past and the visions of the future.

And if we are unsportsmanlike or cheat in this leg, will it undo the credibility of the next person to take the baton? Will we offer a stumbling block by some action that will affect the next leg of the race?

And worst of all: what if our leg is not the end? What if we won’t solve the -isms? What if our children have to carry on the baton? What if this isn’t the end of the race? What if we fall short, and the teams of injustice win this leg? Have I failed? Have we failed?

It doesn’t matter. We run the race set before us, the run that was called for us by the past generations or efforts. The present requires us to be fully present, aware of the past but not limited by their vision, and hoping for the future with a clear-headed expectation.

Your turn: Will you run for justice? Will you take up the baton? Will you run and not grow weary? Will you walk and not faint? Or will you soar on wings like eagles? And when rounding the final corner, and you see a younger, fresher generation that won’t run the same way you will…will you pass the baton?

Prayers for all those who seek justice.

May they run like they are the last leg and the world is about to turn.