You are here: Home / Theology / Chocolat: Work Out Your Own Redemption

For our Wednesday night program at my local church, we watched some clips from the 2000 film Chocolat.

The film is about a quaint Catholic town in France and we begin about 10 years after World War II. The town is ran by Comte Paul de Reynaud (“The Count”) and all is well until a  woman Vianne with her illegitimate daughter come to town and open a Chocolaterie during Lent. Very appropriate for a Wednesday night viewing during Lent!

The Count is a perfect observer of Lenten discipline, but soon finds that his troubles are not just the temptation of chocolate: Vianne is unlocking deep-seeded needs of the town and empowering the misfits that the town used to keep in their place.

The first misfit that Vianne takes under her wing is Josephine, who leaves her abusive husband Serge and seeks refuge with Vianne. The Count is notified by Serge who is most concerned about what the town will think of him. When the Count confronts Vianne, Vianne shows the Count the head wound that Josephine suffered at Serge’s hand.

The Count takes it upon himself to redeem Serge. He takes Serge to confession with the local priest, has him take Confirmation classes with the 7th graders, and teaches him how to be a gentleman at the table. The Count does this to honor the “unbreakable” Sacrament of marriage (even though his own wife has left him and moved to Venice and the Count is too ashamed to admit it) and to prove to Vianne that redemption can be forced upon even the worst of people by the best of people (himself).

However, toward the end of the movie, Serge sees Josephine at a boat party with Vianne’s band of misfits and he sets fire to the boat they are on. Josephine barely escapes and the Count is sympathetic to the loss of the boat, all the while feeling his rigid control over the town being broken by Vianne.

I would claim the climax of the movie is the scene where Serge goes to the Count’s house after the fire and tells him that he set the fire. The Count is horrified by the revelation, and says that people could have died at both their hands. Serge asks if he should “go to confession again.” The Count banishes him from the town and casts him out into the outer darkness.

It is at that point that the Count goes to church, kneels before the crucifix, and asks what to do. He has seen that he cannot force other people to redeem themselves. His project of the worst person in town was a failure, and he was the best person in town (by his own estimation!). The thought of a person who was unable to be redeemed by the most powerful person was beyond his theology. With tears in his eyes, he is lost without his anchor of “discipline conquers all.”

The end of the movie is the Count breaking into the Chocolaterie and destroying the window chocolate display with a knife, but when some chocolate lands on his Lenten-depraved lips, he instead eats his way through the whole display and collapses in tears and chocolate and shame. The priest sees him in the window the next day on the way to church…to celebrate Easter morning. 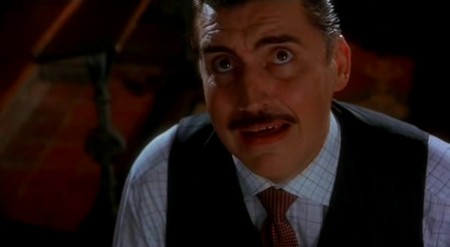 The priest and Vianne get him cleaned up before anyone else sees him, and the priest gives the best sermon ever to the crowd gathered on Easter morning, including a slightly-rumpled Count:

We must measure our goodness, not by what we don’t do, what we deny ourselves, what we resist, or who we exclude. Instead, we should measure ourselves by what we embrace, what we create, and who we include.

On reflection of this film, there are two tenets of Christianity that we are forced to daily work out the contradictions between:

Instead, we are called by Christ to embrace the outcast, create a community of love (on a spectrum from gentle love to tough love), but to always work out our own redemption first. Only by working on our own redemption will we be able to show others what the result looks like, and perhaps then they can work on their own as well…in their own way. Discipleship is embodied by one, not prescripted on others.

Sometimes being released from the past and embracing a new life in Christ takes forty days like in Chocolat. Sometimes it takes forty years. But it always comes exactly when the possibilities are greatest and the potential for transformation is at a peak.

May we pray and work for transformation to come to us all during this next Holy Week and may we measure our transformation by what we embrace, what we create, and who we include around the communion table.