You are here: Home / UMC / Listening to your Call through a Rotary Phone #Explo13 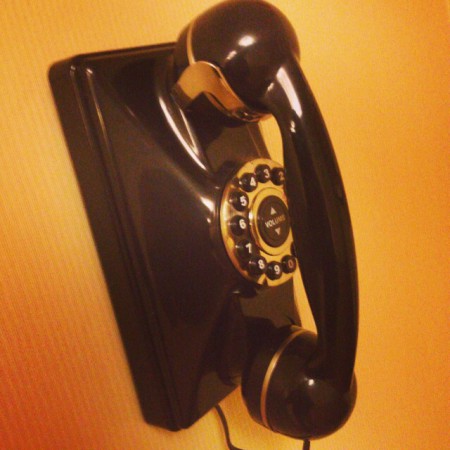 On my hotel floor at Exploration 2013, a discernment event for young adults considering ordained ministry, there’s a rotary phone next to the elevators. And in a way, the phone is a symbol of what this weekend could look like for these young adults.

You know what a rotary phone is, right? It is old school technology where instead of pushing buttons (or icons), you put your finger in a ring and turned the ring until it hit the correct number…then you let go and let it reset. Then you do it again for the next number. Like comedian Louis CK says, you tended to be annoyed with people who had zeros in their number as that was the longest the ring had to go. And if the other person was on the line (no call waiting back then), then you had to hand-redial it again. It was annoying technology.

The thing is: this hotel phone isn’t a real rotary phone. You can see that there’s no ring to turn–you just have to push the numbers in an old-timey interface. So you have the nostalgic look to things but underneath it is a newer experience of the technology.

For many people, their understanding of a “Call to Ministry” is like a rotary phone: it has a certain “look” to it. We celebrate and lift up the people whose calls are dramatic: the voice of God in a storm, a spooky feeling when one touches a Bible, a dramatic voice that says “you SHALL be a minister waaooowaaooo.” We lift up the biblical stories of Saul being struck blind as an example of how a call works: it is easily identifiable, it is dramatic, it is a rotary phone because they all look the same.

But that’s not how many people’s calls are–that’s certainly not how my call was. There was no heavens opening or dove flying down and pooping on my head. It was a gradual process where I could look back and see how God was moving in my life, and it wasn’t until I was already on my Call that I could identify it. I was looking for a rotary phone experience when actually the technology–the way how God was interacting with me–was changed.

So take time to listen at Exploration 2013. Take time to seek out what new ways God might be communicating with you even though you are looking for the “typical” ways. See if God is calling you through the conversations, through the worship, through the small groups, through interactions with seminary and short-term mission leaders, through the silence, through the middle-of-the-night wonderings in your hotel room.

Because I truly believe the phone is ringing, and the good thing is that no matter if the Call looks like a rotary, a wireless, an iPhone, or a car phone…the approach is still the same: pick up the receiver, hit “answer,” and listen to what God might be saying to you this weekend.