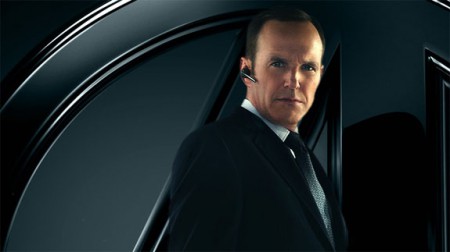 In the series premier last night, we see that Agent Coulson somehow survived his run-in with Loki in the movie The Avengers. He is now back in charge of an elite unit of S.H.I.E.L.D. which is searching for other superheroes either to recruit them or to keep them from becoming bad supervillains. Good stuff!

In the first episode, a man who has been infused with superhuman strength is troubling the city. Agent Coulson is face to face with the Superhero Mike who sees Coulson as “the man” who has taken everything from him and wants to be more like the superheroes or villains to stop the injustices.

Troubled Superhero Mike: You took my wife, my house, my job. You think this is killing me. All over there are people being pushed down and being robbed. When anyone stands up, you have to make an example out of him…You said if we worked hard, if we did right, we’d have a place. You said it was enough to be a man, but there’s better than that. There’s gods. And the rest of us, what are we? They are giants, we have to step up.

We see that the existence of super powers in the Marvel universe is a parallel to the human condition: We are all born unequal. Some are born into privilege and it is like a lens that they don’t know they are looking through. Some are born into poverty, drugs, violence, anarchy…all things that Marjorie Suchocki in God Christ Church calls “original sin.” To Suchocki, original sin isn’t a stain passed down by Adam’s sin. Rather, it is societal conditions we are born into beyond our control. Both the privileged and the impoverished are born into conditions beyond their control. To overcome one’s hereditary conditions is to break the cycle of sin and to show a new way of being. As Coulson says, it is not about “what they have” but about “what they do with it.”

My favorite line came at another point in the episode. Agent Coulson is arguing with his newest agent who wants to shoot and end the life of the troubled superhero named Mike.

Agent Ward: You are going to risk the lives of thousands of people over this nobody?

Agent Coulson: Nobody is nobody.