You are here: Home / UMC / Resisting Dystopia: A Simple Multi-Site Proposal for the #UMC 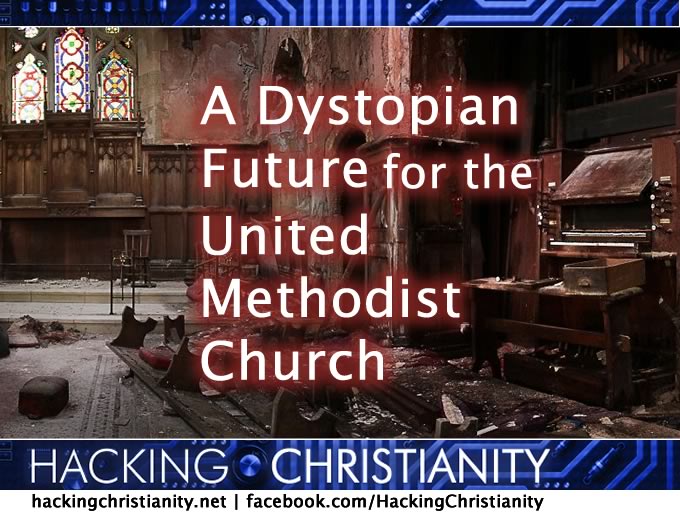 It’s all the rage to talk about a Dystopia these days: a future filled with despair and desperation, not hope and joy. From The Hunger Games to The Walking Dead to Revolution to World War Z, there’s a ton of media offerings that depict a dark future where humanity has to learn to live in a reduced way than they do today.

This past week, we discussed four blog posts outlining techniques of megachurches. Each example church does these techniques well, and I wasn’t out to speak badly of them. Church of the Resurrection, in particular, was singled out not because they are a terrible church (the exact opposite!) but because I am afraid of the widespread effect of their practices. Their strategy is perfect for them and they execute it well. My argument, rather, is that widespread uncritical use of those techniques is problematic.

So I am fearful of the four techniques becoming more widespread without serious accountability and execution standards. That was the series last week. But it is not enough to critique without championing a better way to serve as a corrective to these techniques. There must be an approach to augment and channel these techniques into replicable approaches that better all of United Methodism.

Here’s the one very simple but counter-intuitive suggestion:

Multi-site initiatives must take place in towns other than the one the large church is in.

Not across town. Not across the stream or the tracks. But in a town or region a particular distance away.

Crazy and unreasonable, right? Yes. But if you are also fearful of the dystopian future, here’s how this simple suggestion handles the four problematic approaches:

The first concern is the consumerism is an unchecked factor in a multi-site approach. By offering to take over smaller churches in strategic locations, the effect is that bigger churches do not have an incentive to help struggling churches turn themselves around until they enter into a relationship (be that partnership or abdication) with the bigger church.

The second concern is that piped sermons replaces a diverse connectional UMC presence with a uniform sub-franchise within United Methodism. The easy availability of megawatt high-capacity sermons coming digitally does not give local churches the incentive to opt-into different preachers or styles of ministry.

The third concern is that a production model of worship planning (what sermon series can we package and sell?) is not only theologically problematic but would lead to a drastic reduction in the use of the ecclesial discipline of The Lectionary. The comments on this topic were quite contentious with professors and liturgistas debating the lectionary/topical piece.

I then told them that we were going to tell the whole story of Jesus through the year – from the people crying out for a Savior, through his birth and life and death, resurrection, Pentecost, all of it. I also told them that we’d be doing this at the same time as Christians around the world. They loved it. I didn’t throw it on them as “we have to do this” – but more as “Christians have been doing this for a long time, and here’s why, and here’s why it still works today.” It’s a story that they get to experience – not some dead tradition that tells the preacher what to preach.

I think it’s incredibly important because it’s something the church does together – it connects Christians around the world as we relive the primary stories of our faith, over and over, instead of just what I as the pastor think would be a cute series. It broadens the church beyond its own doors to worship in unison with so many others. I can’t come up with any series that good.

The final concern is that pastoral leadership shifts dramatically with the increased use of multi-site efforts. No longer are preachers needed, but for every megachurch charismatic male preacher they need 5-10 campus pastors whose strengths are administration, nurture, and evangelism ministries. With the theological task outsourced, a caste system emerges with the megachurch recruiting the cream of the crop–and in some cases, hiring and firing their own clergy–while other churches that don’t fit into the multisite model are left with the “rest.”

It is my observation that perhaps the United Methodist Church is best suited to serve as a corrective to this multi-site movement not by limiting the mission field but by encouraging an expansion of it. By requiring multi-site plants to be beyond their borders, such campuses become more missional and less uniform in their expression of the mothership mission while retaining the ecclesiological concern of the original Methodist movement. Grandfathered current sites and exceptions can be made, of course.

Corrective measures seem at first to be backwards-moving and stifling of innovation. While it serves as a short-term “regulation” that may prohibit some multi-site efforts, in the long term encouraging “the world is my parish” mentality of multi-site initiatives could transform the entire movement to be more innovative, missional, and upholding of UMC ecclesiology than unchecked multi-site growth. The UMC is best positioned to make this positive contribution to this growing phenomenon.

Welcome to our visitors and thanks for our readers for encouraging a fifth post!