You are here: Home / UMC / And so it begins again: #UMC Clergy Trial 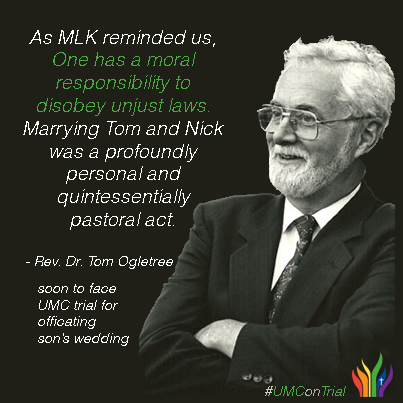 You may have heard of Rev. Dr. Thomas Ogletree. He’s kind of a Methodist statesman. He was the dean of Yale Divinity School and Drew Divinity School. He’s written tons of books and articles. He wrote the section in our Book of Discipline on the Quadrilateral. In short, he’s taught and lived Christian Ethics for his entire life and few people have the breadth and depth of knowledge about working within and without a religious system than Ogletree does.

And out of that Christian ethic, he has chosen to violate the doctrine and polity of the United Methodist Church. Last October, Ogletree officiated at the wedding of his son to his longtime partner, which is in violation of the rules that clergy share.

The New York Times has a great short article for context about Ogletree and the trial.

Dr. Ogletree, 79, is now facing a possible canonical trial for his action, accused by several New York United Methodist ministers of violating church rules. While he would not be the first United Methodist minister to face discipline for performing a same-sex wedding, he could well be the one with the highest profile. He is a retired dean of Yale Divinity School, a veteran of the nation’s civil rights struggles and a scholar of the very type of ethical issues he is now confronting.

“Sometimes, when what is officially the law is wrong, you try to get the law changed,” Dr. Ogletree, a native of Birmingham, Ala., said in a courtly Southern drawl over a recent lunch at Yale, where he remains an emeritus professor of theological ethics. “But if you can’t, you break it.”

While every clergy trial is a terrible terrible thing, I suspect this will be kind of like the trial of Dumbledore and Harry Potter before the Ministry of Magic. Did Harry use magic outside of the rules? Yes. But why? And was it okay? Or were there other forces at work? Such questions will be had at Ogletree’s trial and it will be fascinating to see whom the prosecution pairs with a theological titan like Ogletree.

For an example of the type of argument Ogletree is capable of, he wrote an article on Reconciling Ministries Network that I’m still trying to wrap my head around.

I am deeply grateful, moreover, for the opening section of The Book of Discipline, which reminds us of serious flaws and shortcomings manifest in the larger history of Methodism.  Shortcomings specifically listed include our previous accommodation of racial segregation by establishing a race-based Central Jurisdiction, and our extended denial of ordination rights and prominent leadership roles for women.   These unjust practices were by no means easily addressed or overcome.  Indeed, the struggles to eliminate them generated serious conflicts within the church, conflicts that were only resolved by persistent efforts to press for more just and inclusive church practices.

Indeed, such practices were based originally on a few lines in the Bible, and then over time the Methodist church chose to go a different way–to our benefit. Ogletree expounds:

I fully embrace the basic theological commitments that undergird the mission of The United Methodist Church.  Indeed, I had the honor to play a role in drafting the section on “Our Theological Task” (par. 104, Part II of the Discipline, “Doctrinal Standards and Our Theological Task”).  Drawing upon John Wesley’s teachings, this section emphasizes the priority of biblical authority, and it underscores as well the indispensable roles of tradition, reason, and experience in informing our efforts to comprehend and appropriate the biblical witness.  These principles are clearly incompatible with attempts to settle complex theological and ethical issues by “proof texting,” i.e., the citation of carefully selected biblical texts that allegedly provide definitive resolutions of particular issues.  The self-conscious inclusion of tradition, reason, and experience in our critical engagements with biblical resources actually deepens our discernment of the profound, life-transforming promises of the gospel message.

Just as secular court cases take a single instance and extrapolate it for other instances, I wonder how far-reaching of effects a church trial like this will have on the burgeoning movement to remove the Quadrilateral from our polity and doctrine. But that’s for another blog post…

In the meantime, it hurts my heart when our church’s judicial process becomes front and center to the news rather than our mission, ministry, outreach, and witness to the world. May that witness to the world be made evident in our church trial and that the world can see our unity in diversity on display in life-giving ways.  We’ll be watching this one closely.

My challenge to readers: While any blog post on LGBT issues in the UMC brings out the snakes, let me posit a direct question: