You are here: Home / Internets / Humor / Holy Humor 02 – Interview with THE Unvirtuous Abbey 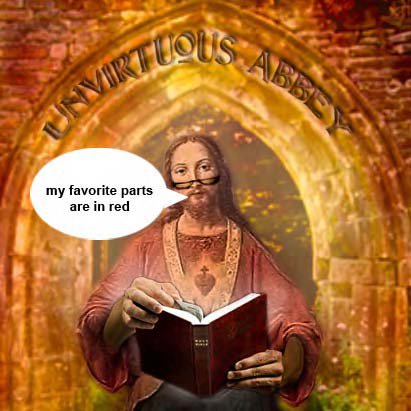 Please note for those who don’t notice obvious tells: The Unvirtuous Abbey is a fictional abbey of fictional monks that only exist on the Internet yet address (usually with humour and prayer) real-life faith and church.

Since 2011, Twitter folks have had a daily source of sacrilegious humor: the Unvirtuous Abbey [facebook][twitter] is a highly regarded account that issues 140 character tweets that often merge biblical accounts with contemporary cultural touchstones. For example:

Lord, you who lifted a cup of wine and said, “Remember me”, we lift up our Grande Vanilla No-Foam Latte and remember you. Amen.

So now, Times New Roman, Bookman Old Style, and Helvetica abide, these three. But the greatest of these is Helvetica.

For people who think it’s gullible to believe in God, yet retweet messages so they can win a free iPad. Lord, hear our prayer.

We pray for the kid texting how bored he is on a piece of technology that 20 years ago could have launched a space shuttle. Lord, have mercy

Lord, you who told us we are only half way there, we are living on a prayer. Please, take our hand. We’ll make it, we swear. Amen

Unvirtuous Abbey has granted two interviews before at Practical Catholic and the Virtual Abbey, and today we have an interview with the UA himself. I sent in a list of questions, and these are his responses.

Question on Culture: You reference a LOT of song and movie lyrics in your updates. Why use these cultural touchstones?

Near the abbey, there is a dance school that used to be a church. And in this dance school there is movement, creativity, and artistic expression. It’s a reminder to us that if we are unable to be creative, express ourselves artistically, and at least move more than from the chapel to coffee hour, we too will become redundant.

A monk in our abbey once wondered, “Has God abandoned the church as a medium?” Meaning, when people want to “feel” or to have a sense of the deeper meaning of humanity and divinity, they tend to go to movies, concerts, theatre, and the outdoors. The answer is, of course, that God doesn’t abandon anything, but it’s a valid question: has the church lost the ability to tell the sacred story?

Question on Technology: How has your choice of a 140 character limit to updates restricted or empowered your online presence? Is it a form of a spiritual discipline to seek brevity and simplicity?

A wise professor once said to his class, “Brevity is the key to communication.” Our longer posts find a home on Facebook and Google+. A look through our posts on Facebook reveal that the most popular posts have been pictures, which speaks to the visual nature of people’s faith.

Question on Presence: What were those “golden tweets” that got a lot of exposure?

Here are a “top ten” list of Tweets/Prayers that connected:

Question on Sacrilegious Snark: You occupy a place of sacrilegious humor, exposing the snarky thoughts that occupy people’s pew brains (and many clergy!). Is snark a necessary release valve of the stuffed-shirtedness of religion, or is it a grassroots reaction to it?

We all think it, right? The best church stories are ministers falling into Christmas trees, pastors saying dirty words (by accident) from the pulpit, and priests getting a bit tipsy on the communion wine.

The snarkiest things that are said in church are said by women in their 80s. And they’re brilliant. During a meeting, a certain “difficult” parishioner was being remembered quite lovingly after they had died. A senior beside me leaned in and said, “It was a blessed removal.” Funny!

Question on Hacking: At HackingChristianity.net, we talk about “hacks” that make Christianity more accessible and open to people to whom the Christian message has been blocked. What is one “hack” that you wish we could accomplish to better present Christianity to an increasingly skeptical world?

St. Irenaeus said, “The glory of God is a human being fully alive.” Be that. Be fully alive. And help the people around you to be fully alive, too. That’s the hack. The goal isn’t to get people to go to church. The goal is to get the Gospel out to the world.