You are here: Home / UMC / Plan B is Enforcing Plan A #CallToAction

In the 2009 Movie “Pelham 123,” good guy Denzel Washington asks bad guy John Travolta how he is going to get away with hijacking a subway train. Here’s their edited-for-language exchange:

Denzel: You gotta understand that the circumstances they’re different now for you. You gotta rethink this, you… you gotta adapt.
John: No, I gave you instructions and you know the consequences.
Denzel: I mean don’t you have a plan B?
John: No, plan B is enforcing plan A… and the minute you stop believing me ****, that’s it!

While “Plan B” is usually referred to as the humorous or less-than-stellar backup to plan A, Travolta says that Plan B is merely to reinforce Plan A. And that’s just the way it is going to be.

This is relevant because a Plan B has entered the conversation with the United Methodist Church: a group of discontent Methodists, most of whom are on the highest executive committee in the UMC (the Connectional Table), have published an alternative to the Call To Action that we love so fondly here at HackingChristianity.net. And in many ways, like the movie, Plan B is only a more palatable version of Plan A’s goal: greater executive authority in the UMC.

Comparing Plan B with the MFSA Plan

Let’s compare the two plans before us that are alternatives to the Call To Action (most specifically the IOT legislation).

The Plan B and the MFSA plan (of which I’m a co-signatory of) have two different proposals of what should constitute the highest executive committee in the UMC. Please click on the chart below to make it more readable and then we have some analysis. Update: the thumbnail below didn’t update when I updated the chart. So you have to click it to get the accurate numbers. Silly thumbnails… 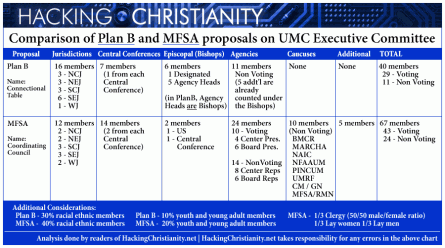 When you compare the two plans, there are many similarities but many points of contention.

It is without irony that the Plan B people state that one of their guiding principles is to create a coordinating body “without a concentration of general church power.” Ha! When compared to the MFSA plan, those six bishops and smaller number of people certainly concentrates power in fewer people with greater power. In addition, with the lower mandates (of racial ethnic members, young adults, and gender), there would be fewer representatives of those classifications than the general population.

Numbers are great, but what are their purposes?

More than the numbers and the statistics, MFSA has a completely different understanding of what this executive body’s responsibilities and purposes should look like.

In short, Plan B gives the Executive Committee (the CT) the power to evaluate and withhold funds from everything in the Church. MFSA indicates that this kind of evaluative role is most appropriately placed with a given agency’s governing board.  Such a board may at times request outside assistance in evaluating its agency, but it is bad management to formally task this to an outside group like the CT.

Downsizing or Right-Sizing of the General Agencies?

Finally, we need to comment on the rest of the reorganization plan: the “Right-Sizing” of the General Agencies

When you wade through all the particulars, Plan B’s proposed setup:

In short, everything that HackingChristianity criticizes about the Call To Action (executive authority and quantitative evaluations, to name two) is also found pretty easily in Plan B. Boom!

I think the only way to end this post is to repost the end of my most recent piece for Ministry Matters:

Given all this, the question remains: which executive body both looks most like the United Methodist Church that we recognize, and which body is closest to what we need right now?

The key thing for me is to decide if the “Methodist” way of doing things has value. Every faith organization has this identity and structure. For example, when our Catholic friends have crisis in their communities, they turn to the monks. When Cardinal Law presided over the Boston Child Abuse scandal and stepped aside, the RCC went to the Capuchin (a monastic order) Cardinal O’Malley. O’Malley sold the opulent mansion and cleaned house, as far as I can tell.  My worship professor at the time said that has been their process through the ages: when the priestly order falls short (I forget the proper term for Law’s vocational lineage), they turn to the monks whose order is more bottom-up than top-down.

That’s the Catholic way of handling crises. Criticize the results how you may want, but it’s the Catholic way. The Methodist way to handle crises is through representative democracy: elected executives, diversity of opinion, big-tent Methodism, social action in varied stratum of society, committees, boards, and mutual accountability. This has been the Methodist way ever since we lost our chief executive in John Wesley and we haven’t replaced him until, perhaps, now. It is through this unwieldy Methodist connectional system that we find both our bane of slow to respond and our strength of holding together diverse groups.

I’m a young clergyperson and my generation has not seen any segment of society become more centralized. For example, music distribution went from the Big Records to Napster to Gnutella to Limewire (becoming more decentralized at each step). I honestly cannot think of any other organization in the world that is movingtoward a “top-down” system rather than away from it . . . other than corporations and 20th century power bases. And yet this move towards centralization and negation of connectionalism is exactly the direction the UMC seems to be heading with the Call to Action movement.

To me, the Spirit is found in the back-and-forth, the struggle for consensus in groups, the diversity of belief and passion that larger more-representative groups bring. They are unwieldy, they are not uniform, they are slow, they are full of sinful humans…but they are Methodist. And it is exactly that quality which I fear is being lost if we choose a proposal that excises difference and consolidates power in the hands of the few. There’s trimming that needs to happen to our family Methodist tree, but I don’t think cutting off the taproot is the best way to go about it.

Thoughts? What kind of church do we need for the 21st century? One with a group of executives at our top (like the Plan B and IOT plans), or one with a forum for conversation and visioning (the MFSA plan). Which is best to guide the church faithfully in our increasingly post-Christian context? And more importantly…will you tell your delegate which you see as best? The power is yours, use it in the next week before it is too late.

Thoughts? Thanks for your comments.