You are here: Home / Series / From Spider to Starfish Churches [1of4]
This series is focused on The Starfish and the Spider: The Unstoppable Power of Leaderless Organizations by Brafman and Beckstrom. Come check it out every Wednesday in June!

The church is in crisis. United Methodist attendance is in decline, the Southern Baptists are…not baptizing, and, most importantly…google searches of God, Christian, and Bible are dropping. The sky is falling!

Some would call it a failure of leadership, both on the local and national levels. But in truth, what is happening to the Church is the same thing happening to large businesses and conglomerates: we become spiders when we should become starfish. 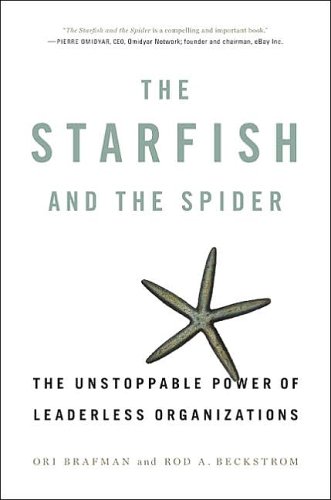 What do I mean by that? In The Starfish and the Spider, Brafman and Beckstrom write about the difference between spiders and starfish.

Whenever a large organization is challenged, it tends to become more spiderlike: it centralizes authority at the head. Some examples:

When challenged, we tend to centralize power in the hands of fewer and fewer people. But what is the source of the crisis? In every case above, the reason for the increasingly centralized authority was because of a threat from a decentralized group.

Now, what about the Church? In what ways are we increasingly centralized to cope with the changing world?

I write all of the above section not to lament and want it back…heavy-handed religion and good ol’ boys clubs are not my ideas of church! But we are still operating as spider churches and denominations in an increasingly decentralized world. In a sea of starfish, how can spider churches catch anything in their webs?

Sorry friends, here’s the catch: This first post outlines the problem. The next three will outline ideas on how to deal with it.

I figured the analysis alone would generate enough discussion. So to make sure we are on the same page, what do you think? Is the major problem confronting churches that we are increasingly centralizing our experience in a decentralized world? Are we really just doing great work, but people’s circles of interaction are so small that they leave the church out?

Finally, for those of you who do not have the book, Methoblogger Richard Heyduck has three posts on the basics of the book: check it out here.

Thoughts on the above? Thanks for reading.